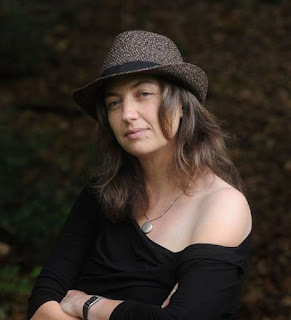 
Many thanks for inviting me to your lovely blog to talk a little about my medieval mystery (with a hint of romance), The Outlaw’s Ransom- the first book of ‘The Folville Chronicles.’

Within The Outlaw’s Ransom, my fourteenth century protagonist is a nineteen year old woman called, Mathilda of Twyford. In the medieval period, nineteen was the age of a full grown woman. Most would be married and have children by that age. Mathilda however, is single, as she’s been looking after her father and brothers, running the home and the family pottery business since the death of her mother.

Her life changes abruptly when she is forced to get to know the notorious Folville family rather better than she would have liked. Suddenly, Mathilda finds herself surrounded by criminals and under a very frightening type of suspicion... 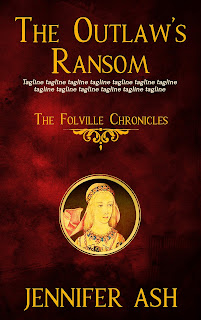 
When potter’s daughter Mathilda is kidnapped by the notorious Folville brothers as punishment for her father’s debts, she fears for her life. Although of noble birth, the Folvilles are infamous throughout the county for using crime to rule their lands—and for using any means necessary to deliver their distinctive brand of ‘justice’.

Mathilda must prove her worth to the Folvilles in order to win her freedom. To do so, she must go against her instincts and, disguised as the betrothed of Robert de Folville, undertake a mission that will send her to Bakewell in Derbyshire, and the home of Nicholas Coterel, one of the most villainous men in England.

With her life in the hands of more than one dangerous brigand, Mathilda must win the trust of the Folville’s housekeeper, Sarah, and Robert Folville himself if she has any chance of survival.

Women in the fourteenth century had to be strong-willed, as well as physically fit, or they’d never have survived. Putting aside the obvious pressures and problems of childbirth, they ran family businesses alongside their men folk, kept the house, dealt with all the food and raised the children. In fact, it all sounds fairly familiar!

I’ve never been keen on the idea of writing weak characters; be they male or female. Such characters frequently fail to hold the interest of a reader, often frustrating you into wishing they’d just grasp the metaphorical nettle and get on with it- whatever, ‘it’ is.

In the case of The Outlaw’s Ransom, it was particularly important for me to have a determined, capable and intelligent female in the driving seat. I wanted Mathilda to not just survive within her enforced hostile environment, but to hold her own and show the Folville brothers that they were dealing with a feisty, clever, woman who could give as good as she got.

Here’s a little taster from when Mathilda – having just been hauled out of the Folville family cell – meets her keeper, Robert de Folville, for the first time.


...The Folville didn’t say anything else, but satisfied himself with watching Mathilda as she stood, half bowed, before him. She wasn’t shaking now. He’d noticed how hard she had fought within herself to still her external reactions to his news of her change in circumstance and had admired her self-control. It was almost as if she had an offended dignity about her rather than terror; an unusual reaction from a prisoner in the presence of a Folville.

He wondered if she’d been taught her letters. Most families didn’t waste their time teaching their womenfolk such things, but Mathilda of Twyford was clearly sharp and capable. With her mother gone, she’d run the household, and he imagined she did that job well. He saw that his family’s plan for this girl might work, but only if she kept that nerve. Otherwise… well, she wouldn’t be the first to die during his family’s quest to maintain their position.

Breaking the silence that had stretched out between them he said, ‘I recall you have questions for me. I can see your head jarring with them.’

‘You may, although I should caution you, I may not choose to offer a reply.’

Mathilda licked her lips and ran her clammy palms down her grubby belted surcoat, which largely hid her brother’s leather hose, and flexed her numb bare toes.

This produced a bark of laughter, ‘You are well-mannered despite the indignity of being thrust, if only for a short while, into our cell. I am Robert de Folville, one of seven brothers of this manor.’

Mathilda curtsied, more out of natural impulse than any feelings of reverence towards this man, whom she knew for certain, had been party to at least one murder. ‘You are kin to my Lord Eustace, my Lord?’

‘He is a man I have been taught to fear, forgive my impudence, my Lord.’

He snorted. ‘I would rather have honest impudence than bluff and lies. So, you have been instructed by your father to be wary of us?’

‘Not only my father, sir.’ Abruptly worried that her boldness might place her family in more danger, Mathilda clamped her mouth shut. Seeing, however, that the Folville wasn’t cross, but had an expression of acceptance on his face, Mathilda braved a further question.

‘Where is my father, my Lord, and Matthew and Oswin, my brothers?’

Robert de Folville paused and, after a moment’s consideration, gestured for the servant boy to bring her a chair. Mathilda was glad to be allowed to sit down, but was puzzled at the equal status she was being afforded after her earlier abuse, as Folville sat next to her, leaning uncomfortably close to her slight, tense frame.

‘Your father and your brother Matthew are at home in Twyford working on ways to pay back your debt. I do not know Oswin’s whereabouts. I am, after all, only one of the younger brothers.’

Mathilda heard the bitterness in him and for the first time, she thought she understood something of this man. Robert de Folville would probably have made a good lord of the manor, but his lot was to be a minor son.

‘You will have heard of the death of Belers almost three years hence?’

‘Yes, my Lord.’ Mathilda spoke softly as she thought back to the day she’d heard first about the murder on Brokesby Field. It may not have happened right on their doorstep, but the frisson of fear the crime had engendered had been felt even in Twyford; such was their closeness to the Folvilles’ manor house; and the waves the crime had created were still leaving ripples these many months later.

He must have read her mind, for Robert slammed his hand against the table, making Mathilda jump. ‘Damn it all girl! Roger Belers was a tyrant! An oppressive, rapacious man who had become a scourge on our county! We did what needed to be done. Hode would have done no less!’

Mathilda said nothing. It was clear he meant exactly what he said. His brothers probably did as well. They evidently believed they were providing a public service. They took their fee for such deeds as wages, just as the sheriff did when he arrested a felon for the King.

Folville leant towards Mathilda earnestly. ‘Did your father ever sing you “The Outlaw’s Song of Trailbaston”, child?’

‘It contains much wisdom, Mathilda. I have no doubt that its great length influenced the author of the Hode stories.’ Robert lounged back in his seat, his arms stretched behind his neck as he began to quote a verse to his captive.

‘You who are indicted, I advise you, come to me,

To the green forest of Belregard, where there is no annoyance

But only the wild animal and the beautiful shade;

For the common law is too uncertain.

What do you say, child?’

Mathilda swallowed again. The ale she’d drunk earlier had been stronger than she was used to. Her head ached, and her throat felt sticky, giving her a thirst worse than before. ‘I believe there is wisdom within, my Lord. I have heard my elders say that the law is contradictory. If we truly have been abandoned by the law, perhaps you are correct to take matters into your own hands – within reason, my Lord.’

Mathilda flinched, expecting her host to strike out. She shouldn’t have said that last bit. Why couldn’t she ever keep her tongue in check? Her directness had always been frowned upon within her family, and now Mathilda was deeply regretting sharing her opinion honestly. She tensed, awaiting the call for a guard to come and throw her back into prison.

It did not come. Folville was peering at her quizzically, ‘You are a curious creature, Mathilda of Twyford. You must realise you have been used to pay off your father’s debts, but you ask nothing of your own future, only theirs. My reverend brother placed you in our cell, and you do not ask why, nor make complaint about your enclosure.’

Mathilda bit her tongue, not wanting to say the wrong thing, despite her desire for answers to the questions he’d posed.

‘Your father told Eustace and the rector that you were headstrong and determined when they collected you. As a result, Richard decreed a spell in our holding cell to soften you to our will.’ Robert snorted into his mug of ale. ‘He obviously never bothered to take the time to speak to you himself before he acted. A fact about my holy brother that astounds me not one jot.’

Mathilda stared hard at the floor. The glimmer of a first smile since her kidnap was trying to form at the corner of her mouth, and she felt guilty for its presence.

She could feel Robert’s blue eyes burning into the top of her bowed head. As he said, ‘Your father vouched to Eustace that you have qualities more suited to a man than to the gentler sex. It seems you are happier in the river or fields than the house and only run the home as it is your duty as a woman.’

Giving no reply, Mathilda was glad Robert wasn’t able to see her face, as she was unable to prevent the crimson blush of shame that came as she heard how her father had described her. Not only was she ashamed, she felt indignant. She’d worked ceaselessly to run the house, the remaining furlong and the orchard as successfully as her mother had done, even though it was a task she didn’t enjoy and frequently resented.

‘Well, Mathilda of Twyford, I will tell you what Eustace has demanded of your father...’ 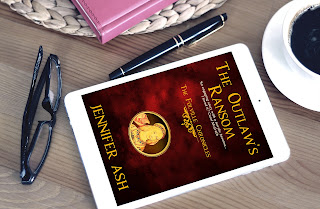 If that has whetted your appetite- then here are those all important buy links!

Many thanks for inviting me to stop by today Teresa.


With a background in history and archaeology, Jennifer Ash should really be sat in a dusty university library translating Medieval Latin criminal records, and writing research documents that hardly anyone would want to read. Instead, tucked away in the South West of England, Jennifer writes stories of medieval crime, steeped in mystery, with a side order of romance.

Influenced by a lifelong love of Robin Hood and medieval ballad literature, Jennifer has written The Outlaw’s Ransom (Book One in The Folville Chronicles) – a short novel, which first saw the light of day within the novel Romancing Robin Hood (written under the name Jenny Kane; Pub. Littwitz Press, 2018).

Book Two of The Folville Chronicles - The Winter Outlaw - will be released in April 2018. (pub. LittwitzPress)

All of Jennifer and Jenny Kane’s news can be found at www.jennykane.co.uk