Anyone else been playing this game? (That's probably a silly question). I stupidly thought it would be fun to download onto my phone so I could play it with the boys. And don't get me wrong, at first it really was great fun. Along the seafront for us, is great for catching Pokemon!

But now, quite frankly, it's boring me. It's also soooo frustrating at times too.

Now I'm not really a gamer, so I don't know what's good or bad about a game, in gaming sense. However, what I find frustrating is that there is no way of collecting all of the Pokemon's unless you pay for incubators and hope you'll get something decent out of your egg. I did pay... I got mainly Pokemon I already had. (It's not very satisfying when a Drowsy hatches out of a 5km egg!) I didn't do it again. I refuse to pay for more incubators if I'm only getting Pokemon I've already got, and don't even need the candy for!

So now I have 9 eggs... and one bloody incubator. Can't we get the odd incubator from a Pokestop? Please? Not just at certain leveling up!

Then, my other gripe is nothing really set at a certain level. You could be on level 10 and catch an Aerodactyl, and on level 30 and still waiting to catch/hatch one. Is that a good or bad thing about this game? I'm still waiting for a sodding Snorlax! I'm level 23! But now 10km eggs seem to be like gold dust, I can't see me hatching one anytime soon.

Then, while out and about, all I seem to see are rats, pidgeys and bloody weedles (unless I'm on the seafront). I know these help to level up etc. by evolving them all the time, yet there are Pokemon's out there, not all that rare, I could just do with seeing a bit more frequently. A Bulbasaur.... I live by a bloody park for pity's sake!

I also get frustrated when I catch a damn Pokemon five (or more) times, and he's still escaping the Pokeball. If I'm not meant to catch him, then make him run away! For rats, pidgeys etc. they have a one ball rule. Can't be arsed with wasting balls on things I don't need!

And now, the Pokestops have stopped being generous on giving out Pokeballs. So I'm definitely sticking to that one ball rule.

Isn't this game supposed to be for kids? Or just us big kids? Either way, I'm finding it rather dull now, and frustrating... let alone fed up that when it is on, I'm charging my phone constantly.

Give me something more exciting to catch, Pokemon Go! Something I bloody need!

You could easily get sucked into spending a lot of money on this game, which makes it more like gambling than gaming. I mean, the average newly released PlayStation 4 game is £40 - but the play value is far higher and more entertaining, isn't it? (Like I said, I'm not really a gamer).
Posted by Teresa F Morgan at 6:26 pm No comments:

What Should I Blog About Next? 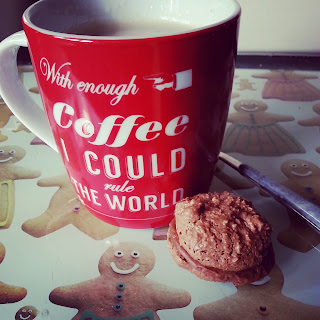 I'm having trouble thinking about what to blog about. I've lost all inspiration.

Sometimes I've shared my deepest feelings about my dating experiences and my poor old broken heart - and that gets a lot of views. And sometimes I blog about my writing.

My greatest blog post which has received the most views is Must Have Kitchen Gadgets For Women.

I wonder if it's coming up in searches for 'kitchen gadgets'. Or is it something a bit more naughtier... It does say kitchen in the title, not bedroom!

I will say, I am now dating a chef :) (I refer to him as The Boss, which is a bit of a joke between us. Because clearly I am The Boss ha ha!)

It's hard to know how much to share at times, too. Or I feel I'm going over the same old ground... So I'm opening it up to my readers... What would you like me to blog about?

Pick a topic and maybe I'll come up with something...
Posted by Teresa F Morgan at 8:52 pm No comments: