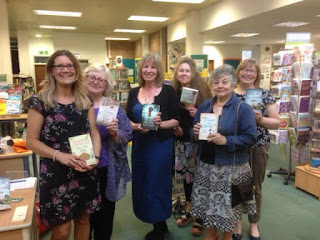 On the evening of Monday 27th June, I joined a panel with these five other lovely ladies. We gave a talk about writing romance to a small audience in Chippenham Library.

We all belong to the Bath and Wiltshire RNA Chapter organised by Rachel Brimble who was in the audience. 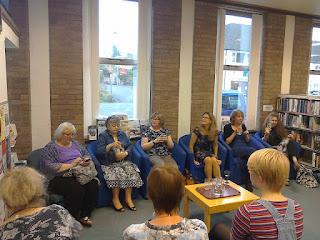 I was extremely nervous because I hadn't done anything like this before and was worried I wouldn't know the answers.

How stupid. Of course I know the answers. 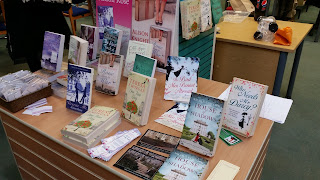 I talked of my experience, and of my opinions, and it was a lovely, fun discussion about the voices in our heads, and how we have to love our heroes. It was just as interesting to hear the other five authors' stories too.

You can not edit a blank page. And if you want it bad enough, and listen to good advice, you can make it.

After the talk we had in usual romance author style, homemade cakes (supplied by the lovely Ali Williams) and wine.

I was so nervous that I wouldn't know what to talk about. A bit silly really when writing romance is my passion. I do need to learn to be more confident about it. And about myself. I have had two books published.

Anyway, this blog post is about sharing some pictures from the evening.

Thoroughly enjoyed myself immersed in the world of writing and talking to like minded people. :) 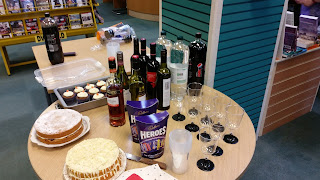 Posted by Teresa F Morgan at 9:44 am No comments:

Heart-pounding romantic suspense set in a world of high-tech security, feuding royals, and missing diamonds. Strap in for sizzling chemistry and fast-paced, thrilling action all the way!

It all starts with an historical romantic suspense set in the birthplace of great engineering and design, The Great Exhibition, London, 1851: 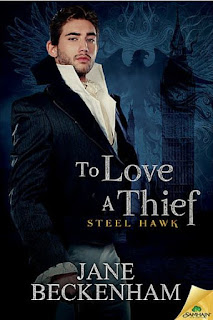 It's one thing to lose your heart. Quite another to have it stolen.

Years ago, notorious jewel thief “The Raven” vanished into the shadows. In 1851, Nathan Hawk emerges into a life of respectability, determined to make up for past sins.

He and his business partner are introducing a lock they’re so sure can’t be broken, they’re displaying a priceless diamond, the Pasha Star, at the Great Exhibition. It’s bad enough catching a light-fingered young man trying to steal the stone. Worse when he realizes it’s the daughter of his old mentor.

Rose Valetta’s father has been kidnapped, and she needs the Star to buy his freedom. She never expected to come nose-to-nose with Nathan. Their reunion is fraught with tension, especially when they discover the diamond in Nathan’s impregnable case is not the Pasha Star.

With Nathan’s reputation in tatters, they race to find the real stone before it’s too late for Rose’s father. Too late to save the empire from a usurper. And too late to keep from losing their hearts.

Contains a woman who dreams of a world with a level playing field, and an ex-thief who can run from his past but can’t hide from it.

And moves to present-day: Steel Hawk has prospered for 150 years, securing some of the world’s most treasured possessions. But now a secret from the past threatens to destroy the company and a new generation must take up the fight. 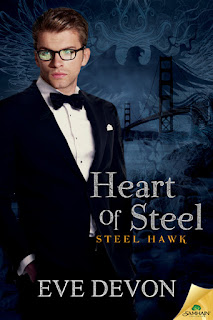 Adam Steel is in crisis mode. A recent exposé claims a founder of Steel Hawk was actually The Raven, an infamous jewel thief. Amid the ensuing damage control, all eyes are on his ability to develop a prototype to secure and protect the royal Pasha Star diamond.

He’s further blindsided when he learns his assistant, Honeysuckle Hawk, has a sordid past he never knew about. Proving he never really knew her, never should have trusted her, and definitely shouldn’t start falling for her.

With her dirty laundry flapping in the media storm, Honeysuckle’s first instinct is to run. Two things make her stay: Adam’s insistence it’s better to show the world a united front, and her heart’s insistence by his side is where she belongs.

High stakes and long hours ignite passion…until the diamond is stolen and Adam’s own prototype shows Honeysuckle is a thief. Dare he trust her to help him expose the real criminal—before the mastermind wreaks havoc on the royal family?

But with the battle only half-won, STEEL HAWK is about to learn that trust has a price… 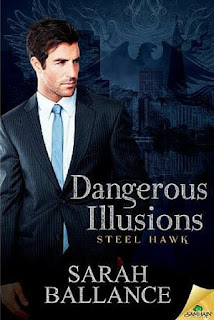 Keep your lovers close, your enemies closer. Especially if they’re one and the same.

With Steel Hawk still reeling from explosions at Zarrenburg Castle and at its own headquarters, company lawyer Edward Long’s legendary stoicism has been severely tested. It’s clearly an inside job, and no one is deeper inside than Edward—which leaves him squarely in the center of a frame.

Someone is using him to bring down the company he loves. Worse, the PI that Adam Hawk sends to investigate…there’s something off about her. And something that seriously turns him on.

Operating under an assumed name, Sophie Hawk aims to dig deeper into the company’s systems than any other investigator would dare. Especially with the prime suspect’s hot-chocolate gaze tracking her every move.

As their dueling intellects strike sparks, the rising heat threatens the trip wires Edward has set up around his heart—and the secret that ties him to a man who’ll stop at nothing to claim his right to rule the house of Zarrenburg. Or, if he can’t have it, destroy it—and everyone connected to it.

About the STEEL HAWK Authors:

Take three authors from three different corners of the world…

Jane Beckenham writes historical and contemporary romance after falling for stories about love and hope. Inspired by happy ever afters she found her own true love and together they adopted and raised two daughters. She lives with her family in New Zealand where writing is her addiction – and sure beats housework!

Eve Devon writes romantic comedy, contemporary fiction and romantic suspense with sexy heroes, sassy heroines, and happily ever afters… She lives in leafy Surrey in the UK, a book-devouring, slightly melodramatic, romance-writing sassy heroine with her very own sexy-hero husband!

Sarah Ballance lives on the US mid-Atlantic coast with her husband and children. She writes in many genres and loves creating unforgettable stories while putting her characters through an unkind amount of torture—a hobby that has nothing to do with living with six children!

So if you love historical romance or contemporary romance, steam-punk elements, inventors, royalty, diamonds, bad-boys, alpha-geeks, co-workers-to-lovers, revenge, and psychological suspense with your mystery; then immerse yourself in the world of STEEL HAWK… and let the seduction begin.


STEEL HAWK – strong as Steel, watchful as a Hawk

Every year, for the last twelve years, I've holidayed with my family in Polzeath, Cornwall. It's situated north of Newquay, with Padstow around its corner and is a great surfing beach.

This year the waves weren't so good, but the sunshine was fantastic! (It usually happens that way). And the wind had dropped too, which meant we could actually stand on the beach and not freeze. The water even felt warm.

To be honest, in the twelve years, the network problems still haven't improved for Vodafone, so I am cut off from the world wide web pretty much all holiday. Which is probably a good thing. I can only send text messages from the beach! I couldn't check emails, and it was hard to peruse Facebook with the sun glaring on the screen... and the kids demanding games of cricket.

The irony is that I seem to get a better reception and 4G out on The Rumps. In my caravan, zilch.

Anyway, I wanted to share some photographs I took. (Unfortunately some may have my children in them). This is my inspiration for Tinners Bay, for the setting/back drop of Plus One is a Lucky Number, and (if I'm lucky enough to get my third book published too), for To Love Again. (Although this title may change. I've learnt not to get attached to a title. Let's play it safe and just call it book 3, because it's the 3rd book I've written).

While walking the coastal footpaths, I wondered if I'd done this scenic coastline any justice in my books. Can't do much about Plus One is a Lucky Number, but I can certainly go back to book 3 and edit some of Polzeath's character into it.

The highlight of this holiday was on Friday, 3rd June, when we strolled to the Rumps (it's a good fair trek, I tell you!) we were rewarded when we reached them, because there were two seals in a small bay below. Absolutely fascinating to watch. We were sure they were waving at us.


Posted by Teresa F Morgan at 9:49 pm No comments: