The Positives Of Lockdown 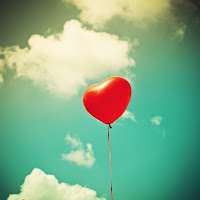 We're in week 4 of lockdown now. This will start to become testing times for even those who have been okay with the isolation and social distancing.

It must be much harder on those who live alone. At least I have two boys and a budgie to chatter to. 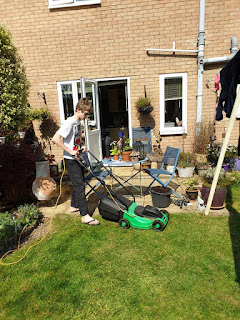 And I am fortunate to be able to go to work, so at the end of a week of staying home, and only leaving my house to exercise, I do see civilisation. (I use that word loosely because some of our customers are far from civilised, and I wish they would treat retail workers with a lot more respect, but that is another blog post!)

As I writer, I'm also far from bored staying home. I can either write or read. In fact, I made a list of things I want to do, but really, I should be writing! So, I'm not sure if lockdown is giving me more time or not really. 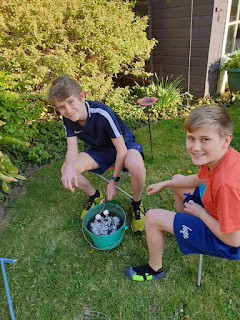 The one true positive about this is that I do have time to cook. I enjoy cooking meals from scratch. I'm no longer trying to get one boy to football, or the other to hockey/athletics. Therefore, I can start tea when I'm ready, and if we have it at 5.30pm, 6.00pm or a bit later, it really doesn't matter.

And the boys have been involved in baking - now we have flour! 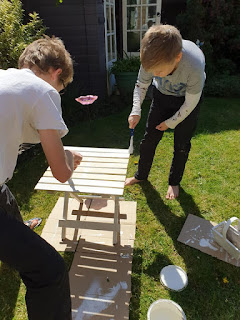 We're also getting to spend more time in the evenings together, so I've got more quality time with my boys. The only downside is we can't go on a day trip to our favourite places. But I do make us go for a walk, and we get to chat to each other while exercising, and discovering the local footpaths around our house that we wouldn't normally walk.

The Easter holidays were challenging. Finding things to do in the garden and to stretch them out, so I could get them off the PlayStation for a bit each day got trickier. 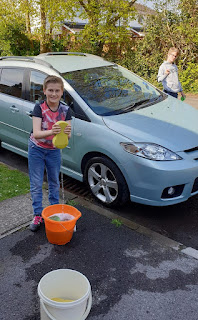 Next week it's back to the home-schooling schedule, so they'll have academic work to keep them off their screens. And I should be able to get back to the writing.

Do you have any positives to take from the lock down? If so, I'd love to hear them.

Stay safe, stay home. Please remember to minimise your visits to shops - for essentials! Plan what you need to buy. This is not a time to browse.

How To Travel Without Leaving Home

In my latest newsletter (I hope that link works!) I said I was going to blog about some book recommendations. So here is the blog post!

As we're all stuck indoors for the foreseeable future, with holidays cancelled, I thought I'd recommend some of my favourite books and authors so that you could travel without leaving home.

We've been incredibly lucky for this lockdown so far, with the weather being very fair to us. It's almost as if Mother Nature knew, chucked as much rain at us as possible, and now is giving us a breather because she knows how much we need our gardens (if we're lucky enough to have one).

So grab your kindle or ereader, because downloading ebooks currently is the quickest way to get a book delivered, and there's no fear of any contamination and catching the virus.

Firstly, you could escape to Italy with Sue Moorcroft's One Summer In Italy. I thoroughly enjoyed this book. It made me want to drink cold, crisp glasses of white wine while I read it too.

Or you could travel to Greece with Mandy Baggot's My Greek Island Summer.  This is Mandy's latest novel, so I haven't read it yet, but I'm sure it will be just as wonderful as her other books. And I just know Greece is her favourite place to be!

If you don't fancy going so far afield, and Cornwall is your thing, Meet Me At Wisteria Cottage turned three recently! It'll give you sun, sea and surf, and a dashing hero in the name of Harry Tudor.

Then, there's Fay Keenan's latest novel, The Weekender, which is set in rural Somerset. This book will allow you soak up the Mendips whilst sipping your favourite cider!

These should do you for now. And the best thing about all of these books - they are ALL are available in Kindle Unlimited!

Romance offers great, uplifting escapism, which we all need right now on our need to social distance.


p.s. I have given links to Amazon UK. However, please *search* the relevant author if you wish to purchase via other means. And if you love their book, please remember to leave them a review. They would love to hear from you.
Posted by Teresa F Morgan at 11:06 am 2 comments:

As I come to the end of the second full week of home-schooling, (they go to their dad's tomorrow as I'm a keyworker and have work), it's not as bad as I thought it would be. (Although maybe ask me the question in September!) 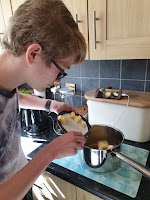 We created a schedule, and because I only have the one laptop, Kieran works on his academic work in the mornings and Ben uses the laptop in the afternoons to do his. (I work on a PC). They are both keen to do PE with Joe, so I let them.

To keep themselves fit, because of their lack of after school sporting activities, Kieran has been running with me Tuesday and Thursday mornings and Ben does his runs in the afternoons. However, due to my hamstring, I might need to dig out my bike and cycle while Kieran runs. His little legs are faster than mine, and my hamstring really isn't right. (Which is soooo frustrating!)

Wednesdays, which is a non-run day, I'm trying to make us go out for a family walk after lunch, so that we've all escaped the house once for our daily exercise. I think this is good for our mental health as well as our physical health. 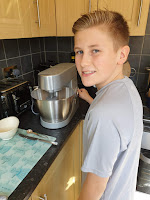 Therefore, and I know this is only week 2, I think we're all coping rather well with our social distancing but we have been lucky with the sunshine, and being able to escape into the garden if desperate, so a different story may appear when the rain returns.

What I am enjoying is the time to make dinner. (I know that sounds daft, right?) But as they're not off to football, hockey or athletics, and needing to leave the house early, I can actually make dinner and take my time about it. Dinner time is more relaxing. I'm not rushing at it and occasionally I'm trying to get them involved, which leads to my next point. 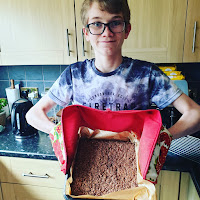 They are taking it in turns to bake each week. Now I have the ingredients, they are baking sweet treats. Kieran helped bake his birthday cake last week, and Ben made flapjacks with Barry Lewis' live streaming on YouTube. (Barry Lewis is like our local Jamie Oliver celebrity. He only lived around the corner from us until recently, but has moved, but we do know where.) Next week, Kieran is going to make Easter chocolate nests, and I may attempt Jenny Kane's Mars Bar Scones!

Because of the lack of clubs, I'm also enjoying our evenings altogether. We've been watching movies! So far we've watched all of the Harry Potter movies - yep all eight! I think the next thing is to revisit Lord Of The Rings.

My writing isn't waning too much either, (as I feared it would) as I work when they work. Yesterday was productive at nearly 1500 words. The thing I'm forgetting to do is my studying.  I am finding it harder to remember that I need to do my proofreading/copy editing course.

In order to encourage more reading, especially from Kieran, I've set up a reading challenge, too. If we each read 2 books by the end of April, we get Pizza Hut delivered. (I enjoyed Pizza Hut so much for Kieran's birthday I wanted an excuse to order it in again!) Ben and I have already agreed that if Kieran doesn't want to participate in this challenge, he can watch us eat the pizza! Ha ha!

What I'm not enjoying is the bickering. Some days they do try my patience.

Anyway, from the Morgans, who are remaining sane for now, please stay safe.

Posted by Teresa F Morgan at 2:27 pm No comments: