Knee Deep In Washing... Is It Worth It?

I'm home, and boy, my washing machine hasn't stopped since I walked through the door Saturday night.

Our family holiday is spent in Polzeath, Cornwall, for two whole weeks.  (I won't go into taking my son out of school to do so, that's a whole other topic).  We've done it now for the last 6 years, staying in a static caravan which is situated so perfectly that we don't have to use the car to get to the beach.  We can walk.  No petrol costs, or parking fees, which can add to a holiday's expense. 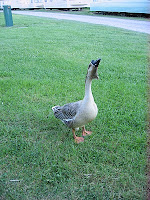 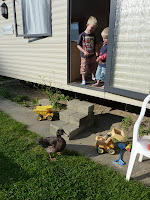 We also love the site (Valley Caravan Park) because it's geared towards families and has some wildlife and 'pets' for the kids to see.  Regularly the ducks come to the caravan for their bread.  There is Chocolate Duck (left), Huff Puff (below), and Goose (right) who are there every year (thank God foxy loxy hasn't got them).  And if you're lucky a mummy duck might come along with her brood of ducklings, or you'll spot some rabbits (I even saw a squirrel this year!).  Just have to watch out for the cheeky seagulls while trying to feed the ducks!

Personally, I don't think you can beat British beaches.  North Devon and Cornwall have some beautiful beaches, with long stretches of perfect 'castle' building, golden sand, and white surf crashing on to the beaches.

I myself was dragged up on Woolacombe beach every year as a kid.  Dad (aka Grandad Ron) was never going to take us away on a plane! Crikey! That would mean getting a passport and enduring hell at an airport!  (It's not that bad, but I know it's something my dad would never have the patience for).

But to be honest, I'm grateful.  When the sun is out here, it's hot! (I've come back with a lovely tan, plastering factor 20 on me everyday).  And if you read the warnings on the back of suncream bottles, well, we shouldn't even be on the beach between 11am and 3pm!  So imagine going somewhere hot and trying to protect your little ones.  I know some choose to do it, but it's not for me.  Not with kids.  I'm not keen on taking small children on aeroplanes.  Gosh, the stress in the car with 'Are we there yet?'  I can only imagine it quadrupled on a plane with 300 other passengers glaring at you as you reply 'NOT YET! (It's just round the corner).' 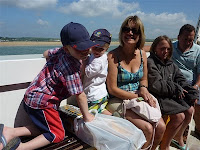 When the sun's out, Cornwall is great.  (I know the reason we do tend to go abroad is to guarantee the sun and I don't blame anyone who's not got kids - I did it before kids!).  And even on the days where it's not so bright, there are walks to do, and touristy things that are perfect for the rainy day.  This is Britain after all!  They prepare for rain, too.

Okay - so the sea water might be cold, (especially the earlier in the year you go) but you get used to it.  Honest!  And really, the kids don't care.  Kieran stood there shivering at the same time saying, "I'm not shibbering."  (His v's are b's at the moment.  Caraban, Nanny Sylbie... It's quite cute).  But could we get him out of the water?  What do you think?

And on our last day, as we walked around to Padstow, you would not believe how blue and clear the sea looked.  You'd think you would only glimpse water as beautiful and clean as that some where hot and tropical.

Oh and a little tip, if you're going to holiday in the UK, do it end of May beginning of June.  (Touch wood), we've always had pretty good weather! (But please don't blame me if the sun doesn't shine for you.  Remember this is the UK, weather is not reliable). Plus you can make the most of the longer evenings. 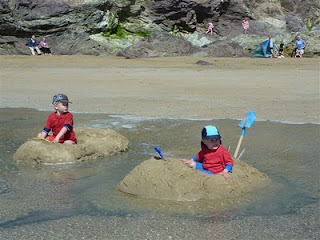 Every year we try to do the beach as much as possible, purely because if you do too many day trips it makes your holiday very expensive.  The boys are more than happy on the beach with their trucks, rock pooling and 'swimming' in the sea.  (Swimming means ankle deep paddling for mummy).  We had Grandad Ron building boats for them (he camped for a week on the same site).  The boys always make friends on the beach.  They met a little boy called Paddy who was two months older than Kieran (though he looked more like a four year old, nearly as tall as Ben).  He had a cracking sense of humour, and for three days they played together on the beach. 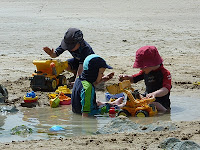 Weather depending we do break up beach days with trips out.   For one it makes our holiday feel longer, and two, well, like I said, it's weather depending.  One day was too wet to go on the beach, and another was overcast and windy, so we went for a long walk and nearly made it to the 'humps'.  We realised the boys would be getting hungry (working out how long it had taken us to walk there, how long we were going to have to walk back....) so thought best to head back, otherwise we would have got there. 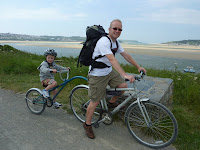 We love cycling the Camel Trail from Wadebridge to Padstow, and this year, because Ben was that bit bigger he could cycle with his dad.  Grandad Ron was most impressed how Ben cycled all ten miles (there and back), without moaning or stopping.  In fact, Dave would rest (stop pedalling) and let Ben carry on cycling!  Kieran was chauffeured by me in one of those trailers - lucky devil! 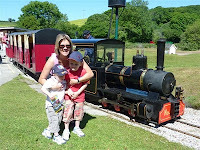 Lappa Valley is another favourite, and not too far away, situated near Newquay.  A little steam ride to the park, where there is enough to fill a day for two little ones and have a picnic.  I wouldn't recommend this place really once your children are over 7-8 years of age.  They might get bored a little easily.  It really is for younger children.

We never made it to Cornwall Crealy this year as the weather was just fab the second week.  But in the first week we did go to Bodmin station to see the steam train and to Newquay's Waterworld (for a swim in warmer waters).

So I have two weeks worth of bath towels, beach towels, bed linen (you have to take your own sheets/duvet covers), clothes, swimming costumes/surf suits.  But a change is as good as a rest, so they say.  So yes, it was worth it.
Posted by Teresa F Morgan at 11:42 pm