Today, I think (and I still won't believe it until it actually happens) I've actually ticked one off my list.  Now, my list isn't very big.

If I think hard about it, this is probably one of only a very slight few (in no particular order):

Today, I may have just ticked off number 6.

That's what all my excitement is about.  I've admired (and fancied - although is it unhealthy to fancy a man the same age as your dad?) this man since I was about 11, when he appeared in The A-Team.  I watched him avidly, feeling quite stalker-ish actually, on Celebrity Big Brother. I can believe that poor man was subjected to Jade Goody!

I vaguely remember him as Starbuck, but did buy the DVDs a while back, and kindly had my memory refreshed.  Oh thank you for DVDs!

He's currently in theatre as Lieutenant Columbo.  A good internet pal made us aware of this.  Another spotted that it was touring!  I'd missed Cardiff, and even Windsor (could have stayed at my mum's) and the closest to me is either Plymouth or Truro.  Plymouth will be a good 2 hour drive, but it's closer than Truro.

Anyway, I knew Hubby couldn't really take the time off (and probably wouldn't be that interested), so I asked my Dad (who is an A-Team fan, too, and he liked Columbo) if he'd come.  Sorted out the child care, as it's a school day and I've booked two tickets for Plymouth.  The last two on the fourth row, which I think is the best as they're more expensive than the first three rows (apparently you'd be looking up in those). It's the matinee performance which will work well with the kids, and travelling and everything!

Oh. My. God.  I'm going to see Dirk Benedict in the flesh!

Quiver - that's because I'm trying to refrain from jumping up and down like an excited teeanger!

Not really sure this is what I designed my blog for... but thought what the heck, gotta put my excitement some where!

So, now I realise I actually do have a 'To Do List Before I Die' maybe I should add a few more things to it?

And no, I don't fancy climbing Mount Everest!  Let's keep it realistic.  To be frank, I never thought I'd see Dirk aka Face, aka Starbuck in the flesh! 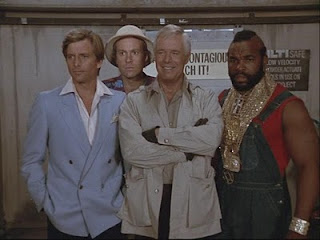 If you need a reminder, picture of 'The A-Team' - taken from Bullets & Bikinis - Season 3
Posted by Teresa F Morgan at 9:14 pm