Romantic Debate With The Optician 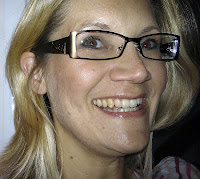 Well, I thought I better get a blog post in before I head off to sunny, I mean rainy Cornwall. Something tells me I will need to pack my wellies! What is it with June this year?

I've charged the Kindle... Thought this was easier than taking a pile of books. I'm still reading my Katie Fforde, Living Dangerously, which I can empathise with the heroine quite a bit, so that will come too.

So I picked up new glasses today. And as you can see, (unfortunately I have to be in the pictures too) this is the best I could do with the phone on my camera. I can actually switch the camera around. But when I do that, the bloody thing goes blurry. I think the lens on the front of the phone is not as good at focusing as the back one. So bit startled and scared pictures, trying to concentrate on pressing the button, as I didn't have anyone in the house to take the photo for me. Haven't quite trained the cat yet.

The glasses are full frames - where as before they were half. And I've gone darker... hoping I look really intelligent now!

Anyway, as well as collecting my glasses I had my contact lens appointment. The guy who isn't even 30 (well he might have been, but he looked quite young to me) notices that on my notes my occupation(s) is customer assistant (at the big ol' retail giant express) and a writer. He laughed at the combination, then asked me what I wrote.

At the moment, when I say romance I feel quite cynical - I am getting a divorce and don't really feel there is such a thing as happy ever after - in fact that's why I write it. It's the only Goddamn way! I generally don't have a high opinion of men, full stop. However, he then groans and starts going on about how women's fiction has become less literal or something, I can't remember quite what he said, but he quoted it all being like "Fifty Shades Of Grey."

Now I've not read this book but I know that there was a mini debate on it on my facebook wall a while back. One person loved it, while others hated it.

Then we discussed Twilight and (luckily) agreed on that one. Though I don't think Stephanie Meyers is a 'bad' writer, I just didn't enjoy the story because it's written for teenage girls.

He enjoyed Wuthering Heights, talking of it being expertly written - it is but it is also dated (and I hated the storyline) - but when I mentioned Jane Eyre, which is very descriptive, because again that's of its age and fashion, but is a much better story (in my opinion) he said he hated it. I did nearly want to punch the guy, truth be told. Apparently he dumped his last girlfriend because she 'liked' Twilight.

I was trying to explain that writing nowadays needs to be less descriptive... but sometimes, trying to discuss this with a non-writer, even if they are readers, goes a little over their heads. Ah well, I got my contacts anyway lol!


Now I must finish packing and crack on with some more writing as I'm not attending my (new) writing group as intended. For today's tottie, I will leave you with a new video from Maroon 5... I've got a thing about men being all dirty and beaten up - and Adam Levine looks hot in this video! Becky Black understands this obsession... particularly with one of our favourite TV characters.

Warning: It is the explicit version!

The lyrics are poignant for me at the moment. "One more f*cking love song, I'll be sick." Love it.

Don't worry, I maybe cynical, but I will still write romance.