So Fantastic I Forgot Surprises

I've been so busy with house hunting (yesterday), and then today I had a trip out with Year 1 from school. Kieran is in this year, so it was lovely to spend a day with him and his friends. I got allocated five children (including Kieran), and they were all as good as gold.

Having recently been to Ashdown House, I was treated to Tyntesfield House which isn't that far from me actually. It took longer by coach, but I reckon it's probably not twenty minutes away. 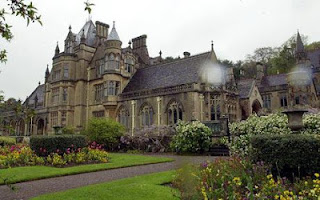 Unfortunately, with school policy, I wasn't allowed to take any photographs at all. So I've grabbed a photo off the internet, and if you click the picture, you'll know where I got it from. The Victorian house belongs to the National Trust so if you have membership, you can go and see it for free.

The school was provided with plenty of guides, and they did some fantastic activities with the children, considering they're five and six years of age. Our little group walked in through the servants entrance and was greeted by all the bells on the wall from the rooms, each with plaques underneath so you knew which room the bell belonged to. I felt like I'd walked in on the set of Downton Abbey.

We also got to see a part of the house that isn't open to the public. But I need to go back, I didn't see half of the place really. We saw enough for the attention span of five and six year-olds though.

Another thought has occurred to me whilst out with the kids for a good six hours. I actually enjoyed it, to the point I might investigate what it is really like to be a teaching/learning assistant. I know I want to be a writer, but in the meantime maybe I need to think of something that I can work around the children. I was surprised by my patience, and my firmness - there is no messing with me. And I love being a dinner lady (I mean lunchtime supervisor). Maybe I could do it?

Admittedly, I did have five well behaved children... I'd probably scare the naughty ones, or get extremely frustrated when they didn't do as they were told. I hate being ignored.

It's a thought. But I know the training takes about a year, plus would I get in at the school my kids go to? Because that might make a difference too. I will talk to some other mums I know who are teaching assistants, and see what they say. And let's face it, maybe in a year I might have sold a book...
Posted by Teresa F Morgan at 6:08 pm