I'm thrilled to have Rachel Brimble in the Hump Day Hot Seat today. I first met Rachel at the RNA Conference in 2011. We were in the same dorm, so gathered in the kitchen drinking wine... I mean coffee.

When I joined the RNA New Writers' Scheme in 2012 I was able to attend the RNA Bath and Wiltshire Chapter meetings which Rachel organises. So we meet up regularly.

Let's find out more about Rachel...

1)      Which of your characters is your favourite, and why?

I have SO many favourite characters but there are two special ladies I hope will travel a long distance with me. They were introduced in the first book of my Harlequin Superromance series, Finding Justice. Cat Forrester is the heroine and I had such a good time writing her story. She’s ballsy, fun and deeply caring. Just a great all-round heroine who features quite heavily in book two (A Man Like Him) as well as a small cameo appearance in book three. My other favorite, is the series matriarch, Marian Cohen. She is FABULOUS!! She’s featured in every book so far (I’m currently writing book 4) and a joy to write. It’s like I’m taking dictation every time she’s on the page J

I always have a book on the go…usually three! It’s usual for me to have a hardback for reading in bed, a paperback for the bath or when I’m walking the dog (truly!) and then my Kindle for the car while I’m waiting to pick the kids up or doctor’s appointments etc.

I’m not a writer who immerses myself in or avoids a certain genre when I’m writing – I enjoy reading whatever I want, whenever I want. As far as I know, it doesn’t affect what I’m working on.

Ooh, great question! It very much depends on how much I liked the book. I have a growing collection of authors whom I love and avidly collect their backlists. These are my “keepers”…as are my increasing collection of signed books. For the rest, I like to pass them on to my friends, my mum or mother in law. I like the thought that a book is being read over and over and word of mouth is the best way of getting readers to search out more books by the same author.

Location seems to be a big factor in my inspiration – most of my books start with a setting, whether it be real or fictional. I then decide my sub-genre because I write mainstream contemporary and romantic suspense, as well as Victorian romance. When I have the sub-genre decided, the characters and their problems usually start appearing soon after!

5)      Cocktail or shot? If so, what one? Cocktail
You're going to have to let us know what your favourite Cocktail is, Rachel! Ha ha! 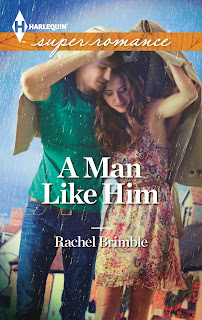 Rachel’s latest release is book two in her Harlequin Superromance Templeton Cove series – A Man Like Him is available right now. Here’s the blurb and a short excerpt:

After two years in hiding, Angela Taylor knows her independence is worth it. As long as she can escape her past, she has everything under control. Until a flash flood hits the park where she works, and hot Chris Forrester shows up the exact moment she needs a hero.

Chris proves he can save lives-and weaken a girl's knees. But how can she make him understand that she's off-limits, that getting close to her will endanger his life? Her happiness or his safety: it shouldn't even be a choice.

Because when you love someone, you protect them, no matter the cost. At least, that's what Angela keeps telling herself....

Their eyes locked and Chris’ gaze dropped to her mouth. It fell ajar and her tongue poked out to wet her bottom lip. He snatched his gaze back to the sky. They were in the middle of a disaster situation. They were reaching out to each other for support. Nothing more. Nothing less. So why the hell was his heart beating like a damn jackhammer?
He shielded his eyes against the sun and prayed to God she hadn’t seen his need to kiss her. He focused on the helicopters. “Damn it.”
She shifted beside him and he felt her gaze on him once more. “What is it?”
“They’re not going to be any help to the people stranded in the trees.”
“Of course--”
“Those vultures aren’t going to do a damn bit of good. Where are the rescue teams?”
“What are you talking about? What vultures?”
“Can’t you see?” He shot his arm toward the sky as frustration hummed along his nerve endings. “They’re TV helicopters. A fat lot of bloody help--”
“TV cameras? Oh, my God.”
Chris turned. Her face grew ashen and she swayed back on her heels, her eyes wide with terror. She gripped his forearm. “Help me. Don’t let them see me. You have to do something.”
“What? What are you talking about?”
“Chris, please. Help me.”
Without thinking, he pulled her into his arms and she buried her face into his chest. He brought one hand to the back of her head, the other to the small of her back and pulled her close. She fit the contours of his body like she was meant to be there.
He held her tight. “What is it? What’s wrong?”
She shook her head against his chest. “It’s over. It’s all over.”
The helicopters circled one more time and then flew away, disappearing over the horizon once more. “They’ve gone. Angela? Look at me. What is it?”
She pulled back and tears slipped over her lower lids and down her cheeks. “I’m dead. He’s coming. He’s coming and this time he’ll kill me.”
He gripped her forearms, adrenaline filling his blood on a protective wave. “Who will? What are you talking about?”
She closed her eyes. “My husband.” 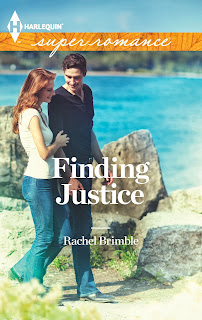 Rachel lives with her husband and two young daughters in a small town near Bath in the UK.  After having several novels published by small US presses, she secured agent representation in 2011. In 2012, she sold two books to Harlequin Superromance and a further three in 2013. She also writes Victorian romance for Kensington--her debut was released in April 2013, with book two coming in Feb 2014.

Rachel is a member of the Romantic Novelists Association and Romance Writers of America. When she isn’t writing, you’ll find Rachel with her head in a book or walking the beautiful English countryside with her family and beloved black Lab, Max. Her dream place to live is Bourton-on-the-Water in South West England.

She likes nothing more than connecting and chatting with her readers and fellow romance writers. Rachel would love to hear from you!

Thank you so much, Rachel, for taking the hot seat on my blog today.
Posted by Teresa F Morgan at 9:00 am