A New Obsession... The Man From UNCLE

Ever since watching this film with my friend on Thursday, I haven't stopped obsessing about it. I wanted to see it because of Henry Cavill who plays Napolean Solo (the American Spy). Ever since seeing him as the Man of Steel, I've been a fan! And in this movie he doesn't disappoint either. He shares the screen with two other great actors, Armie Hammer (Illya Kuryakin) and Alicia Vikander (Gaby Teller) and the chemistry between the three of them is amazing. 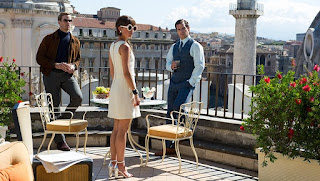 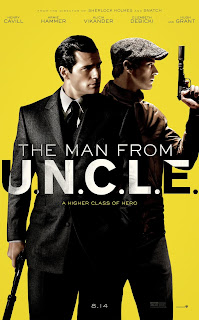 Solo and Illya (the spies) have a love/hate relationship which is fun to watch but as this story unfolds, I found myself loving the relationship between Illya (the Russian spy) and Gaby (the East German girl). I don't want to ruin this film with any spoilers, but they have to pretend to be engaged... and you all know how I love relationships that are pretending to be in a relationship. Yes, I've been on YouTube and yes there are fanvids of these two already :)

There are a few moments in this film where these two sizzle. You think they're about to kiss... you want them to kiss... desperately...

Guy Ritchie directed this film. It's of his usual calibre, but I would say it's better - if not his best yet! Brilliant. You will be entertained from start to finish, there is never a dull moment, the comedy is timed to perfection. But the comedy isn't spoofy, it's just dry and fun. The film is set in the 60's to keep it in line with the TV series it is inspired by.

One fantastic action movie! My friend and I came out of the cinema wishing we could go back in and watch it all over again. Don't worry, I still have a love for Henry, who is my inspiration for book 3 (which I'm currently writing) but I think it's safe to say, Armie Hammer, my Russian Spy, with his blond hair, blue eyes and slim, muscular build at 6' 5" will be my next book inspiration - or he'll be fighting it out with Tom Hiddleston.

If you're wondering - like I was - where have you seen Armie Hammer before, he's The Lone Ranger with Johnny Depp which is okay, and he's Prince Alcott in Mirror Mirror which is the tale of Snow White and is another fantastic movie.

Here's the official trailer of The Man from UNCLE. I promise this isn't showing you all the jokes and best bits. The whole movie is the best bit!


*I've found the pictures/photos off the internet, I've lost track of who they belong to, but they don't belong to me. And I hope the owners don't mind me borrowing them for the cause of bigging up this awesome movie.
Posted by Teresa F Morgan at 4:20 pm