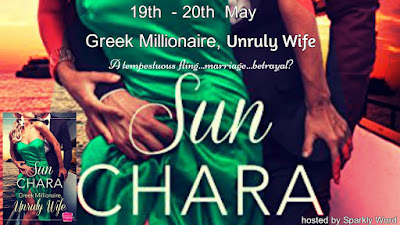 Jet across the globe and tour the glamorous lifestyle of the wealthy and the beautiful…heart-stopping alpha males and spunky heroines ignite the passion and the pain in a tug-a-war to their Happily Ever After.

When Michalis Leonadis’ bride jumps ship at the first sign of rough waters, he’s annoyed. When she costs him a marriage and a billion dollar deal, he’s furious; but when he discovers she ditched him whilst harboring a secret…he’s out for revenge.

Ex-model, Julia Armstrong gave up everything for Michalis but when she catches him with another woman, crushed, she jets out of his life. The proud Greek blasts back into her world seeking retribution—in exchange for a divorce, he demands she relinquish the one thing she cannot. Her daughter. Only one other bargaining chip remains…Julia herself. 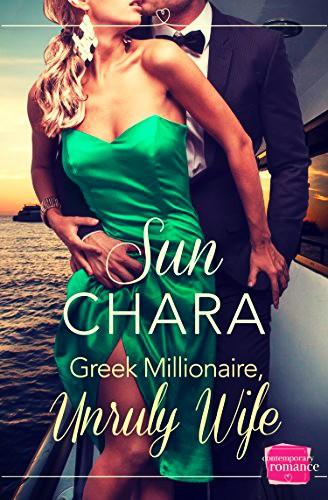 Sun Chara, a multi-published, JABBIC winner for Manhattan Millionaire's Cinderella, writes sexy, hip 'n fun contemporary romance, high adventure historical romance, and any genre that knocks at her imagination. Globetrotting for lore while keeping tabs on Hollywood leads, she loves the challenge of creating stories for book and screen. Designer frappuccinos with whipping cream/sprinkles on top make everyday a celebration!

Find out more at:

The man chuckled. “The model’s not for sale, monsieur.”

“You wanna bet?” Michalis Leonadis loosened his tie, lifted an arrogant eyebrow at the sales manager of the Haute Couture show in Paris, and geared up for battle...not with the manager but...with her. Tracking the model every step with his slitted gaze, he slipped a hand inside the pocket of his jacket and extracted a card, then a pen.

Julia, strutting down the runway and steaming up the ballroom in the Hôtel de Crillon had cost him a marriage, and a billion dollars in a Tokyo deal gone belly-up. As if that hadn’t been enough, his head of security informed him she’d recently given—

Applause broke out, splintering his thoughts, and spiking his fury...his passion. For revenge.

She’d ripped his heart out. Shredded his pride. Cost him.

Her untimely exit had rocked his sphere and his bank account. She nearly bankrupted him. He’d put everything on hold to search for her, and to clean up the legal mess his uncle’s amour had created when she’d charmed... er... scammed the old guy into signing half the Leonadis fortune to her and ultimately her heir. The fortune Michalis had slaved over years to amass.

He set his jaw, batted that distraction from his mind, and turned his laser sharp eyes back to the supermodel, his present dilemma.

When he found out Julia had been living it up in Paris, he’d shut her out, and scrambled to salvage his business and stay afloat— he’d waste no more time on her. He was better off without her.

A spike lodged in his aorta, but he ignored the sting.

He clamped his teeth, his breath rumbling in his chest and escaping through his nose in a hostile sound. How dare she keep that a secret from him?

Cold, calculating bi—the expletive stinging his tongue was smothered by shouts of “Brava!” from the audience.

He scrawled a message on his business card, adrenaline pumping him to action.

She’d definitely pay. He curled his lip. His way.

Michalis slapped the card in the man’s hand. “Make sure she gets it.”

The man glanced at the bold insignia of the Leonadis Cruise Line on the card and inclined his head. “Oui, Monsieur Leonadis.”

Michalis tuned him out. He liked things simple. She’d been anything but.