My First Ever Visitor - Cherie Nicholls 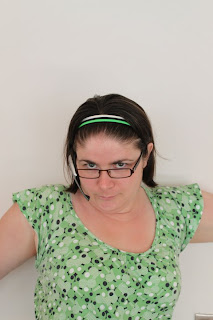 Okay, I'm a wee bit new to all this, but Cherie Nicholls is here to talk about her début book ‘Leashed By A Wolf’.

Cherie and I ‘met’ in September 2010 – we both entered a first chapter in the Mills and Boon New Voice competition. We were both unsuccessful to get past the first stage, but we have formed great friends and writing buddies through participating, so neither of us regret getting involved.

Cherie Nicholls lives in the London and writes paranormal romances - your traditional love story but with a twist. She comes from a very large family; she’s the youngest of 5 with 4 nephews, 3 nieces, 5 great nieces and a god daughter. By day she’s an IT geek and by night an author.

I asked Cherie four questions and these were her answers!
Q: Give us your elevator pitch (to your readers) for what your book is about?

A: Dear me this is a really hard question! Let me see what I can come up with… Hmmmmm… ok let’s try this: It’s a story about one head strong woman, mixed in with an alpha wolf, stirred with a spoon of assumptions and hot attraction served on a plate of forever.

Q: My 'Twitter' question - Describe your heroine in 140 characters.

A: Laney St Clair is head strong, smart, sexy & can fix your car & kick your butt - all at the same time, depending on how bad you annoyed her.

Q: Obviously you're in love with your hero - you wouldn't have written him otherwise - but why do you love him, and think your readers will too? No character limit this time lol!

A: Heath is tall, strong, and alpha to his back. He can be a formidable leader when he needs to be but can also be a doofus. Because he is fiercely protective, he sometimes doesn’t realise they may not need him to protect them and they can stand on their own two feet. But I love that about him, his caring side is just as strong as his masculinity without each detracting from the other.

Q: And can you prove that all published writers are really human?

A: Well, that’s a bit hard to be honest. As most people who know you will tell you, as a IT geek I am never far from a machine nor do I often go without a gadget in my hands. So some say I am part machine… but as a whole, I think I am human, or so the doctors said when I was born.

I think most writers are human, we write the stories we do because there isn’t anything else we could do. Once a character is in your head, they won’t go away until you have told their story. We, most of us, don’t do this for the money - let’s be honest unless you are JK Rowling or Dan Brown this won’t make you rich - but we do it because we want to take you on a journey through the lives of our characters. We want you to be there at their first meeting, laugh when something funny happens and cry when something tears them apart. We want you to feel that anger they do but most of all, we want to leave you with a smile on your face and the knowledge that just for a little while you left this world and visited another, where just about anything can happen and often does. Did I mention that Heath Marsterson can turn into a wolf?  And do not get me started on the other characters I have ready to introduce to you all! See just about anything can happen...
Thanks, Cherie. Good luck with the book – and what a fantastic cover! How super sexy is that? 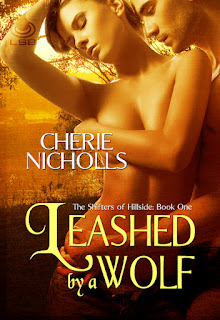 Leashed By a Wolf - Released by Liquid Silver 27th February 2012
Mechanic Laney St. Clair doesn’t want much in life. All she wants is to run her father’s garage as she sees fit, her brothers to stop treating her like she is still their baby sister, and for Heath Marsterson to realise that under all the grease and overalls she is a grown woman, ready, willing, and able to show him just how talented her hands can be.

Heath’s an alpha shifter who knows he needs a mate to help him rule. A strong woman who can stand with him and up to him when needed, a woman who can help keep his pack safe. What he doesn’t need is a fragile human whose family protects her as if she’s made of spun glass. No matter how persuasive little Laney-girl tries to be or how much he wants her, Heath knows she’ll never be strong enough to handle his true self no matter what she says, moans, screams…

So, how did my first blog tour go?