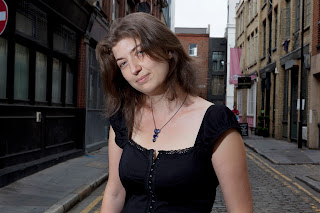 It's been a while for my Fake Friday feature, but today I have Jenny Kane on my blog. Jenny and I get to meet up - not as often as we'd like - at our RNA Chapter meeting in Lacock. I feature on Jenny's blog a little while ago... and I wanted to return the favour.

Have you always wanted to be a writer?

No - I wanted to be an archaeologist- and I was! I didn't find out I wanted to be a writer until I was 33 years old - it happened by accident over a coffee and a Mars Bar scone…

I did - but it took 13 years to happen! The first book I wrote, Another Cup of Coffee, was published in 2013 - 10 years after I’d had over 100 other stories, long and short, published (under the name Kay Jaybee). I simply didn’t think Another Cup of Coffee was good enough at first. It took me all that time to get it just right.

Rugged Cornish decorator, Max Pendale, is determined never to take a chance on love again, until he meets Abi…

My Twitter style question: Describe your heroine in 140 characters.

Young widow, petite brunette children’s illustrator, Abi Carter, is on the run from an unhappy life. A fresh start in sunny Cornwall is calling her.

I tend to read genres that are opposite to those I write. Although I do sometimes read romance, I wouldn't read it while I was writing one of my own. I would be afraid the book I was reading would influence the plot I was writing.

I keep them. I can never bear to part with a book, even if I haven’t enjoyed it. My bookshelves couldn't be more crammed if I tried.

To keep a list of all the words and phrases I tend to overuse, so that when I have finished a novel draft, I can go through the whole thing and check I haven’t been excessive with those words. For example, I am a horror for having the words ‘slightly’, ‘long’ and ‘little’ in my manuscripts too often. 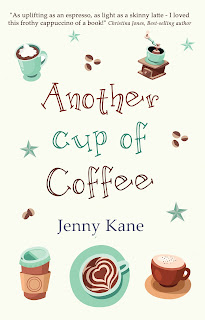 What is next on your agenda after publishing your book?

Now that Abi’s House is published, I am working on adding the finishing touches to the draft of my next novel, Another Glass of Champagne. This is the fourth in my Another Cup of… series, which follows on from Another Cup of Coffee (novel), Another Cup of Christmas (novella), and Christmas in the Cotswolds (novella). This new novel will be out in early 2016.

How would your best friend describe you in 140 characters? (Another Twitter question).

I asked one of my friends - and she said:

Coffee - always black! I write a coffee shop blog called Have Americano and Pen…Will Travel – so I’ve sampled a lot of different black coffee’s in a huge number of café’s and coffee houses.

No question - it has to be Costa. My local one even has a plaque over my usual table I write in there so often!

Thanks for some fab answers, Jenny, but I'm trying to do the maths and I thought you were a lot younger... lol! 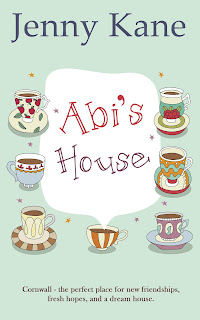 
Newly widowed at barely thirty, Abi Carter is desperate to escape the Stepford Wives lifestyle that her late husband was so keen for her to live. Abi decides to fulfil a lifelong dream. As a child on holiday in a Cornwall she fell in love with a cottage – the prophetically named Abbey’s House. Now she is going to see if she can find the place again, relive the happy memories … maybe even buy a place of her own nearby.

On impulse Abi sets off to Cornwall, where a chance meeting in a village pub brings new friends Beth and Max into her life. Beth, like Abi, has a life-changing decision to make. Max helps Abi track down the house of her dreams … but things aren’t quite that simple. There’s the complicated life Abi left behind, including her brother-in-law Simon – a man with more than friendship on his mind … Will Abi’s house remain a dream, or will the bricks and mortar become a reality?

With a background in history and archaeology, Jenny Kane should really be sat in a dusty university library translating Medieval Latin criminal records, before writing research documents that hardly anyone would want to read. Instead, tucked away in the South West of England, Jenny Kane writes stories with one hand, while working for a Distance Learning Company with the other.
Jenny spends a large part of her time in the local coffee shops, where she creates her stories, including the novels Abi’s House (Accent Press, June 2015), Romancing Robin Hood (Accent Press, 2014), the best selling contemporary romance Another Cup of Coffee (Accent Press, 2013), and the novella length sequels Another Cup of Christmas (Accent Press, 2013) and Christmas in the Cotswolds, (Accent Press, 2014)
Jenny’s next full length novel, Another Glass of Champagne, (Part 4 of the Another Cup of... series), will be published by Accent Press in 2016.
Jenny Kane is also the author of quirky children’s picture books There’s a Cow in the Flat (Hushpuppy, 2014) and Ben’s Biscuit Tin (Coming soon from Hushpuppy)
Keep your eye on Jenny’s blog at www.jennykane.co.uk for more details.
Twitter- @JennyKaneAuthor
Facebook -https://www.facebook.com/JennyKaneRomance?ref=hl
Jenny Kane also writes erotica as Kay Jaybee. (www.kayjaybee.me.uk)