I Should Have Deduced Sherlock At Tyntesfield 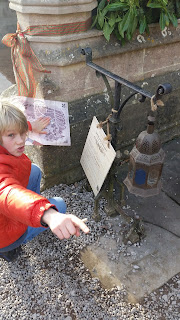 Before Christmas, but during the holidays, I took the boys and my dad to Tyntesfield as a trip out, making the most of our National Trust membership. We'd gone in the afternoon, as it's only up the road from us, and sadly the house tickets were all sold out, so we did the Sherlock Holmes trail which was around the grounds of the house.

At the time I thought it a bit odd to be doing a Sherlock Holmes trail at Tyntesfield, but then thinking of the era of Sherlock Holmes and the age of the house, it was probably quite fitting. The National Trust put things on during the holidays especially for kids, so it probably wasn't all that strange really.

New Years Day, like the majority of the population, I sat in front of my TV watching the much awaited new episode of Sherlock. 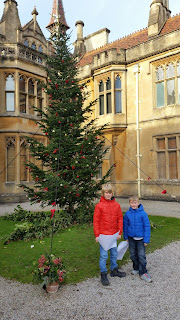 I realise now, Tyntesfield were giving us a clue that the house would feature in Sherlock!

I sat there, watching, thinking, I recognise that house. Having been there recently, too, and walking the outside of the house, I spied the shutters down. This is to stop the sunlight from fading and deteriorating the rooms.

In one clip, the same shutters were down. I don't want to give too much away about The Abominable Bride, in case you haven't seen it, but this glorious house does feature for part of the story. What really gave it away for me was at one point Sherlock and Watson were sat in the little aviary which is out the back, near the rose garden. I was like, "It IS Tyntesfield." 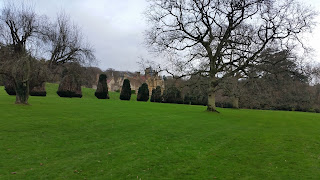 Sadly the maze featured in Sherlock is not really at Tyntesfield - which is a shame because I love mazes!

The episode is worth a watch. I loved it. Clue: It might help you appreciate it more if you've watched the previous episode about the mind palaces.

UPDATE: So, while I was putting this blog post together, conversations were happening on Twitter (I love the powers of Twitter) and Tyntesfield confirmed there are Sherlock tours at the house :)