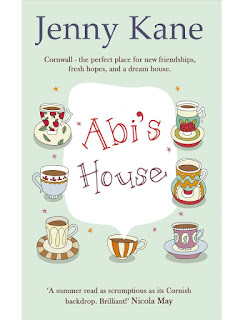 
Many thanks for letting me nip by to talk about my Cornish romance, Abi’s House.

Let me introduce you to Abi Carter.

Thirty-two years old, short, petite, and almost fragile to look at, children’s illustrator Abi Carter is much stronger than she looks. She has to be. For only six months ago her husband, Luke, who’d been twelve years her senior, suffered a totally unexpected fatal heart attack.

Although she misses the Luke she had first known, the Luke that Abi had been living with for the past few years had no longer been that man. With each promotion in the city, he’d become more money and status obsessed. Abi hadn’t been able to keep up- she hadn’t even wanted to.

Now, guilt ridden because she can’t miss Luke as much as she think she ought to, Abi decides it’s time to walk away from the city life that was making her so unhappy and follow a childhood dream. A move that is going to take a hell of a lot of guts and determination...

Newly widowed at barely thirty, Abi Carter is desperate to escape the Stepford Wives-style life that Luke, her late husband, had been so keen for her to live.

Abi decides to fulfil a lifelong dream. As a child on holiday in a Cornwall as a child she fell in love with a cottage – the prophetically named Abbey’s House. Now she is going to see if she can find the place again, relive the happy memories … maybe even buy a place of her own nearby?

On impulse Abi sets off to Cornwall, where a chance meeting in a village pub brings new friends Beth and Max into her life. Beth, like Abi, has a life-changing decision to make. Max, Beth’s best mate, is new to the village. He soon helps Abi track down the house of her dreams … but things aren’t quite that simple. There’s the complicated life Abi left behind, including her late husband’s brother, Simon – a man with more than friendship on his mind … Will Abi’s house remain a dream, or will the bricks and mortar become a reality?


Here’s an extract to whet your appetite...

...Nerves and an inconveniently accompanying wave of guilt hit Abi as she pulled into Taunton Deane services. With the border that divided Devon and Somerset a few miles away, Abi could feel the enormity of the step she was contemplating starting to disturb her concentration.

Making a beeline for a desperately needed cup of coffee, preferably with a side order of something unhealthy and smothered in chocolate. ‘Although not a bloody muffin,’ she muttered under her breath.

Abi couldn’t stop thinking about what her brother-in-law had said when she’d finally given in an answered one of his calls. Had Simon been right? He’d talked to her as if she’d flipped, and had suggested rather forcefully that the trauma of Luke’s untimely death must have had more of an effect on her mental health than they’d all initially thought.

Abi hadn’t been able to stop herself from laughing at the time, assuring Simon that she was very sane, thank you very much, and that if she didn’t like Cornwall, she’d be trying other locations, but that was her business and not his, or his parents. To both humour him and shut him up, and because ultimately it really would be useful, after much consideration, Abi had decided to tell Simon she’d accept his help with ensuring a seamless and tidy sale of the house if he was still willing.

Abi had been quite proud of herself, as Simon had given her his fervent promise that he’d keep an eye on the house sale while she was away, with no expectations or agenda. Now however, as she queued for her overpriced drink, Abi couldn’t help listening to a treacherous voice at the back of her head telling her Simon might be right. Perhaps her leaving was just a delayed knee-jerk reaction to Luke’s unexpected death.

Luke may not have been the best husband in the world, and she didn’t miss being put down in public for one minute, but at the same time she’d never once doubted that he’d loved her. It was more that he always acted as if he wished he didn’t.

Every day since his death it was becoming harder to remember how she’d let herself be changed from a successful businesswoman (who had admittedly been acting her socks off to portray a strong image and hide the true shy persona beneath) to the mousy wife who’d do anything to avoid the look of disappointment in her husband’s eyes when she failed yet again to live up to his expectations. I did love him, and I do miss him, but …

Abi looked out of the window, trying not to let another stab of emotion get the better of her as she watched a happy family of four, all holding hands, cross the car park. Had she been so naive to dream that she and Luke could have a family like that one day?

Despite their age difference, Luke had always given Abi the impression that he wanted children – until about a month after their honeymoon. They’d been eating in a restaurant, and a family had come in with a baby that wouldn’t stop crying. Luke hadn’t been just indignant, he’d been plain rude to the parents about their inability to keep the infant quiet. All the way home he’d ranted about how families shouldn’t be allowed in restaurants with babies, and preferably with no one under sixteen. When Abi had stuck up for them, saying that there was no way anyone could predict when a baby would cry, and that having children in restaurants from a young age helped teach them good manners and social interaction, she had been cut short with a cold look, a look she would become all too familiar with over the next few years.

A look that was followed by Luke informing her that there was no way they were ever having a creature that behaved like that! And that had been that. All conversations about having a family were closed, and every attempt Abi made to resurrect the discussion met a brick wall of silence.

Was she really striking out for a better life on her own terms, or was she running away from the hurt Luke had brought her when he was alive, and again now he was dead? Could she even do this? Determined to remain calm, Abi found a semi-clean table and sat by the window, staring out blankly across the sea of parked travellers’ vehicles.

She looked down at her drink ruefully. Luke certainly wouldn’t approve of her drinking coffee from a paper cup. After his mega-promotion at work, even drinking from a mug rather than a bone china cup and saucer was only something to be done when circumstances allowed no superior alternative.

Continuing to watch the chatting couples, groups of friends, and families move about the car park, tears started to gather at the corners of Abi’s eyes. By allowing Luke to take over every aspect of her life, she’d missed out on so much. She hadn’t meant to be so feeble – but with Luke …

With a sustaining sip of caffeine, Abi knew she’d been miraculously given another chance. She wished it had come about in another way, but nonetheless, it was a chance, and she was not going to waste it.

Abi suddenly had a strong desire to do all the things Luke would never have approved of. She wanted to mess up her salon-perfect hair, maybe get a tattoo, go out of the house without make-up, make friends …

...she wanted a house she could wear shoes in without anyone having apoplexy about dirty footprints on the carpet. She wanted a home that felt like a home, not a place that was on the verge of expecting royalty, or an impromptu visit from Homes and Gardens magazine.

Daydreams of long costal walks and lazy cliff top meanderings, maybe with a dog (one with long hair that would get all over the furnishings!) filled Abi’s head as she knocked back the remains of her coffee...

I hope you enjoyed that. If you’d like to read on, then you can buy Abi’s House in either paperback or as an e-book from all good retailers, including- 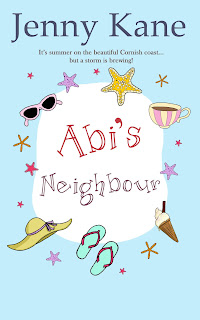 And from 4th May you can buy the brand new sequel- Abi’s Neighbour!!

Many thanks for letting me pop by to chat, Teresa, 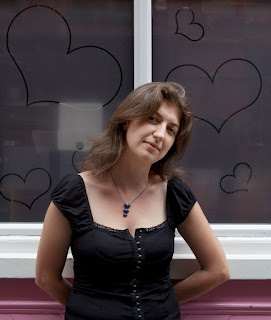 Jenny’s sixth full length romance novel, Abi’s Neighbour , will be published in May 2017.

Keep your eye on Jenny’s blog at www.jennykane.co.uk for more details.