In The Mood For Christmas Now

Over a year ago, I was bursting at the seams.  I'd booked us a mid-week holiday in Center Parcs for a very nice price.  Just shows how time flies, because we've now been and gone on that holiday, and we had lots of fun.  It was Winter Wonderland theme, and therefore very Christmassy.  Every cabin had a wreath hanging outside its door, footpaths and areas were decorated with pretty, white fairy lights.  The Plaza was especially picturesque. 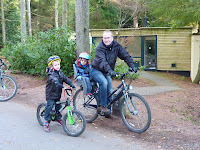 On the Monday when we arrived, we hired bikes, and Ben had his own, while Kieran had a seat behind Daddy.  Bikes are a good way to get around in Center Parcs but in places it is hilly.  It's geared up for the bikes, with bike parks dotted all over the place.  Ben, on a bigger bike than he is used to, cycled really well (Grandad Ron would have approved!).  He was nervous about going down hill, but Ben being Ben was very cautious (I can see Kieran in years to come crashing at every turn as he whizzes down the hills - our not so cautious son) and I think he was afraid he might not be able to stop himself.

We managed to go swimming practically every day - well, Daddy took Ben late on Thursday, while I put Kieran to bed (and told him Daddy and Ben had just gone for a walk, not daring to mention the S word).  We'd done the Spa that afternoon, while the boys had enjoyed the Merry Berry Ball - Kieran winning 'Pass The Parcel'.  He refused to have his picture taken afterwards - he was so tired.  But we caught him on film anyway - albeit a bit grumpy.  He just can't resist having his face painted!

Our woodland lodge was wonderfully equipped - it had a dishwasher! I know it's a bit home from home, but a dishwasher means I'm not the one standing there doing the washing up.  It meant I could sit and relax in the morning after breakfast, with a cup of coffee, and watch our neighbours, Mr Robin and Mr Squirrel.  In fact, we saw three squirrels at one time trying to get on to the brick BBQ that was outside our patio doors.  I'd put some peanuts out there (obviously not salted!) and they were beavering away (or squirrelling away I suppose) the nuts, and we'd see them bury them and come back for more.  Sometimes he'd bury locally, or he'd run off down a route and be back after five or ten minutes.  I could have sat there all day watching the little fellow.  (Next time, I'm taking my bird and squirrel food with me - not paying Center Parc prices - and my little garden bird book). 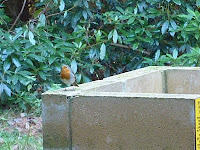 We were extremely lucky with the weather - although cold (it was the middle of November) we had great frosty, dry weather.  Clear skies - we needed our sunglasses more here, than in the Isle of Wight in August.  The rain kept away, so it enabled us to be out and about during the day and the early evening. With a couple of layers on we were lovely and comfortable, and the promise of a log fire in the evening, to make us extra toasty.


All I can say is, Center Parcs is a great place for the family.  There is plenty to do; some you have to pay for, some for free.  Ben wanted to do things like the paint balling, but we had to tell him there were a lot of things he couldn't do because he wasn't old enough.  If your sports or adventure minded, this is a place for you.  It is a bit pricey but if you take plenty of food and drink with you, you can afford to treat yourself to the odd coffee (as there are Starbucks!) or a visit to The Pancake House - that was a naughty lunch we had!  It's just a good idea to go armed with snacks for the kids.  Some of the activities are reasonable, some again, expensive. It all depends on how expensive you want to make the holiday.  I was extremely conscious that it was our third holiday this year, and it was meant to be done on the cheap!

What I particularly like is that the car gets left behind in the car park, so with a (nearly) six year old on a bike, you had little fear of him getting hurt - unless he falls into a ditch just outside our lodge, trying to race Daddy! Ah-hem!

You can hire the bikes or bring your own, but afterwards when we returned ours, we were allowed to keep our bike locks - which pleased Ben as he wanted to buy one (for his new bike that he's getting for his birthday). 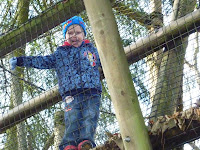 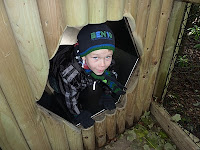 The kids thoroughly enjoyed themselves. Initially they were wondering where the beach was - they associate holiday with the sea!  They loved all the swimming and cycling, and gradually we wore them out.  They kept getting up at the crack of dawn - not helped by sharing a room, they are real chatterboxes - but Friday morning, it was Sod's Law we had to wake them up!

Anyway, we've come back refreshed and revitalised... and ready for Christmas.
Posted by Teresa F Morgan at 11:10 pm