Resolutions, Goals And A Little Inspiration

I'm rubbish at New Year Resolutions. It will only stress me out, and they are usually forgotten by February. I will try to eat more fruit, and I want to beat my five writing hits from last year (actually it could be six as apparently I was in Friday Magazine 30th December but I haven't been sent the links... and I couldn't find 'me' by myself.)

I'm not great at setting goals. I am a very organised person generally. I was a secretary by profession. I actually like admin though depending what it is, it can soon bore me senseless as I pick things up quickly. But since becoming a mother, and finding that the routine can so easily be disrupted, I find goals hard to set. I'm better off writing a to-do list for the day sometimes.  All I know is my goal for this year is to start submitting The Wedding Favour (ASAP) and to get my second novel, Perfect Isn't An Option finished and sent to the RNA NWS (by 31st August). Any short stories and assignments achieved will be a bonus. Plus try to beat my running mileage for last year which was 282 miles. Oh and read another 40 books.

I suppose I will try to make sure this blog remains entertaining... and therefore posting hot pictures of men writing inspiration like this one: 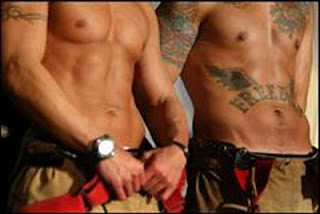 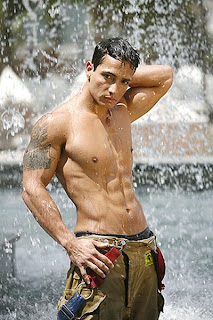 I have a book idea for a fireman - so all relative, honest. It might be next book (3) I get to write. Who knows?

Does anyone else get comments from their non-writery friends that they comment too much on Facebook? I've had a couple of friends tease me about how much I'm updating it. They joke I update my status about my running, but their statuses will discuss the football. That doesn't interest me, but I don't tease them about it.

Maybe it's because I am at home all day usually, and something will enter my head (while doing that mundane thing called housework) and I feel the need to share. If I'm honest, I'll try to think of something funny to see if someone will hit the like button. But who doesn't?

I know some of my writery friends update their wall regularly, and it doesn't bother me because I use Facebook in the same way. I've now found, like Twitter, with Facebook if I miss something, I miss it. I don't get too stressed over not seeing someone's update. (Though I worry slightly if it might be an important one - writery news). I've got over 300 friends now, but a lot of those have become writing friends (so now I have to watch what I put on my wall lol!). Admittedly, I was never really intending on making friends with 'strangers' (because I post stuff about my kids) though they are not really 'strangers' in the writing world. (Please don't be offended if you're one of those 'strangers'). But I don't want to make an author page yet... I may not be superstitious, but I do believe in jinxing things. The irony would be I make an author page now and never become an author ;-) Plus, I might not be Teresa Morgan in pen name yet . (That's another blog post).

With the teasing though, I have found myself a little conscious about what I post. Maybe they notice me more because they might not have as many friends, and then the friends they do have, not all post. Some are just watchers, some have an account and never even go on it - luckily I have those friends too! So little ol' me who switches her PC on first thing in the morning and updates regularly, (and is addicted to social networking) probably looks like I'm there all the time. I am not. I do have housework, and writing to do... plus running around after the kids.

So, before I break the blogging rules and make this post way too long (which I fear it already might be but I wanted to discuss Facebook) do you have resolutions? Do you get teased about how much you update Facebook?