My Name Is Rio 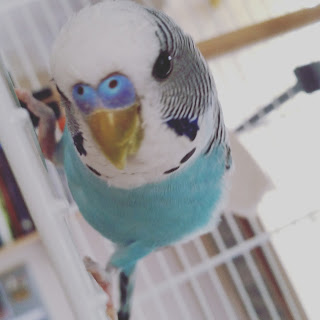 I'm not sure if I've told you about the new love of my life; Rio. I will tell you again anyway. He is a budgie. He is turquoise blue, and he is beautiful.

I bought him in October, as a birthday present to me. Apparently, he was only 8-9 weeks old, with his baby bands on the top of his head (which is now white in the picture). He is my pet.

This is so I don't have to nag the boys to feed him or clean him out. He is my responsibility, and yet, he gives the boys great pleasure. (And we get to laugh at his mad bird acrobatic ways). 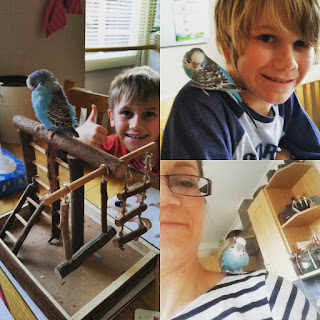 I purchased a budgie because I so dearly wanted a pet in the house. I can't afford another cat, and I definitely don't have the time or the space for a dog either. (I don't really have space for a cat, the first thing we noticed when Chloe passed away was we had our only sofa back.)


Anyway, he is the best thing I could have done. He's given my kids a pet, but he's so much more interactive than the gerbils were. He talks to us in his chirpy way at breakfast time, and he's happy to land on us. He's getting more and more confident each day. Plus, he's such a funny thing to watch some times. His favourite things are his bells.

I have so many photos of him, and videos, but I've just posted these few to amuse you. 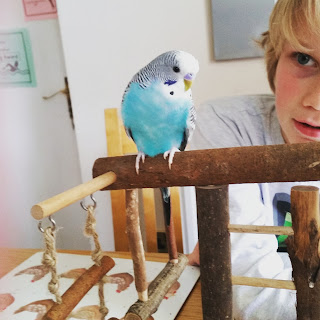 We are trying to teach him to talk. I keep saying things like 'beautiful bird', 'Hello, my name is Rio, and 'smoke me a kipper, I'll be back for breakfast,' and other silly things. Kieran keeps saying to him, 'Kieran is my best friend'. So cute.

The boys named him Rio after the film, because the bird in it is called Blue, but we decided that wasn't as original as Rio. It suits him so well.

When I go out, I always leave the radio on for him, so that he doesn't get lonely. They are sociable creatures, and quite intelligent. If I ever thought he was unhappy, I would get him a mate.