Catch Up And Holiday Antics 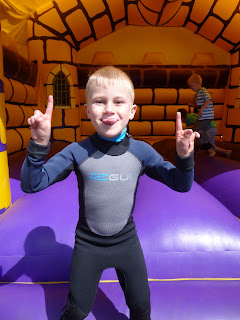 I haven't forgotten that I need to continue with my holiday antics, but this week's been a bit odd, frankly. Very low then very high. And I now have my manuscript still in its jiffy envelope, arriving this morning, returned from the RNA NWS, and I'm too afraid to open it.

Could it continue my high, or send me back down into the lurky depths of a depressing, frustrated low?

As I have work later, and that's bad enough as it is, let alone feeling miserable about my writing, I'm going to save the envelope opening ceremony until this evening, when I can have a glass of wine to hand, to steady my nerves.

Don't worry, I'll let you know how I get on!

The sun returned! Hurray! But it was still a bit chilly on the beach. We spent the morning feeding chickens, bouncing on bouncy castles (well, the boys did), and surfing. After lunch on the beach, Dad and I took the boys for a walk to The Rumps. Obviously, we grabbed an ice cream on the way. I had chocolate fudge - it looked so nice when Ben had it the other day.

To make it sound more adventurous than just a walk, as my six-year-old can complain after a while, I said we were going on a bear hunt. And that was it. The boys were off, always ahead of us and never really allowing us to catch up. Little voices singing, "We're going on a bear hunt, we're gonna catch a big one. What a beautiful day."

They let us catch up at The Rumps but were soon running off!

We were home in time for dinner and watched Spring Watch. I think the boys slept soundly that night. And so did I.