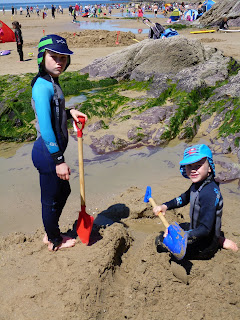 We woke up to sunshine on the Sunday, so it was a day spent on the beach. Out of that chilly wind, it was quite warm.

Grandad Ron treated both the boys to new wetsuits. I thought he was only going to buy one for Ben, as he needed a new one, but Kieran came back wearing one too. Dad's idea was that *hopefully* if they were both warm on the beach, he'd get a bit of a break as they'd go off and play happily together. Hmmm....

That day involved a lot of surfing, boat building (of sorts, as they built a spaceship rather than a boat) and cricket. The boys were a lot warmer though... unfortunately Dad and I were not. How was I supposed to tan my arms up if I had my cardie on? I know... I'll hide in my tent...

The lovely thing about the beach is that kids will just come and join in. A little boy, although older than Ben and therefore bigger, jumped in with the boys as the tide battled against the sand spaceship, enjoying the fun, too. I love how kids can do this. Unfortunately we didn't really see much of Paddy and Freddy as we were further up the beach.

Later, we (Dad and I - Mum had sloped off back to the caravan) did match Ben and Kieran. With high tide approaching around tea time again, and the boys wanting to surf, we donned our wetsuits too. I can't believe I managed to fit into mine after all these years. (I'm not sharing the photo. lol!) I wouldn't have fitted in it two years ago! (Must keep up with the running.)

The water was so cold this year that the wetsuits allowed us to stand in the water with the kids for longer. Don't get me wrong, the water is usually cold, but it felt colder this year because it hasn't had a chance to warm up with the horrid weather we've had. Our feet were like blocks of ice. The rest of us was warm watching the boys surf, but we couldn't feel our feet.