It's ended up being a Blog Swap weekend, as I am over on Becky Black's blog, and she's kindly come over to mine. (I'm just a bit late getting mine posted - sorry! I blame the day job, and the kids.)

I always say Becky was the one who got me into this (writing) mess. If it wasn't for her encouragement over 7 years ago, I probably wouldn't be here, and neither would my two novels. She has helped me immensely. Becky is also my living proof that fan fiction writer's can turn into professional authors.

Becky is here to discuss her 6th book published by Loose Id. She write's M/M romance in a Sci-Fi setting.

1) I’m loving the sound of your new book, and can’t wait to read it. Where did you find the inspiration behind your new book, Red Dragon #1: The Company Man?

It first made an appearance in my mind nearly two years ago. The initial inspiration was “The East India Company – in space.” The East India Companies were big powerful trading companies who played a big part in creating the empires of Britain, France and Holland. They were like the Apple, Ford, Samsung etc of their day. And they got up to all kinds of machinations and dodgy practices far away from Europe and any scrutiny. It thought it would be interesting to take that and write about similar companies, but in the future, in space, far from Earth and up to plenty of the same kinds of schemes.

And at the centre of it I decided I’d put two men who even as they are falling in love will clash over the company’s methods. One an ex military captain a man used to following the rules and doing it by the book and the other the company rep who’s much more morally flexible in pursuit of his ambitions to be a top trader.

The name for the series is actually quite recent! The series and the ship at the centre of it was called the Indiaman (which is what the East India Company ship were referred to as, Indiamen.) But the publisher requested a change and I chose Red Dragon, which was the name of one of the first ships of the British East India Company. So it’s still a reference, just a more oblique one. It’s also a kind of good omen for one of the heroes of the story Alyn Evans, a proud Welshman, who takes command of the ship at the start of the story.

2. I notice this is a series. How many books do you have planned for this series?

Right now, I’m planning three. But that’s changed before! The ending of the series kind of opens up the possibility of a second series as the characters move on to a new phase, new challenges in their lives. New stories to tell about them. But I’m not promising that. Maybe I’ll be bored with them by then!

3. My favourite Twitter style question – describe your heroes (as you have two) in a 140 characters each.

Alyn Evans:
A man you’d want on your side in a crisis. Principled, but a bit rigid, so he’ll have to adapt to really thrive at the company. Coffee lover

Jarvez Kashari:
Ambition is his priority, until Alyn comes along and screws up his plans. Sophisticated, but with a dark side. Tea drinker and coffee hater.

I trust you on these, Becky!

4. What’s the title of the next book, and can you give us a little insight into what it will be about? Does it follow on from The Company Man, or is it another individual story but in the same universe?

The title of the next one is – currently anyway, these things change – Too Good A Man. It is a follow on, with the same characters. It’s going to go more deeply into the conflict Alyn has between his principles and the company’s methods. And Jarvez’s worry that his lover won’t stay with the Red Dragon, or with him, for much longer. But Alyn’s principles are going to get him into deep trouble… 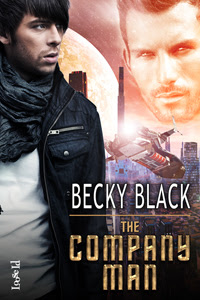 Jarvez Kashari travels light, sacrificing relationships for ambition. Alyn Evans is out to establish himself as a company captain. Falling in love was not part of either man’s plans.

The Red Dragon is a ship in trouble. It was once the pride of the Outer Spiral Trading Company’s fleet, but is neglected and fallen from its old glory. It’s a ship in need of love – and a new captain.

Alyn Evans is a man in need of a new challenge. He’s an ex-warship captain and peace has put him out of a job. A man of his experience should have no trouble commanding a merchant ship…he thinks. But of all the challenges he faces on his first trip out, the hardest one is keeping his hands off his gorgeous and fascinating company rep, Jarvez Kashari.

Jarvez Kashari is a man with a plan. He’s determined to make a name as the company’s best trader and thinks reviving the fortunes of the Red Dragon is the perfect opportunity to prove himself. Jarvez travels light, sacrificing personal relationships to focus on his ambitions – until he meets Alyn Evans. Falling in love was not part of the plan.

It’s four months to Earth. Four months for Alyn to juggle passengers, prisoners, suspicious officers, a resentful crew and the intensifying relationship with Jarvez. Four months in space with a traitor aboard…

Thanks for visiting, Becky! Good luck with your new book. Another hot cover, I notice.