The Last of Our Holiday Antics

Fish and Chips, and Trampolining 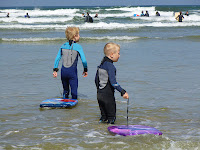 This was our last full day in Polzeath. We would be heading home the following day. We woke to the sun shining, and it was getting warmer - mildly. Again, we donned the wetsuits and surfed with the high tide in the morning. In fact the sea was still coming in.

Kieran decided he would surf that morning but he didn't go too deep, having lost some of his confidence. 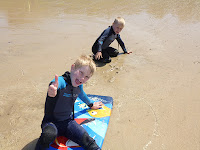 After an hour of surfing, we returned to the caravan for lunch. Then Dad and I took the boys back down to the beach where we played cricket and they mucked around in the pools left behind by the tide. We had well earned fish and chips for tea.

Before the holiday, I'd found my old Whot cards and packed them. It became our holiday's game this year - dominoes forgotten! Ben and Kieran mastered the game - it is really easy! - and it filled our evenings nicely - or maybe excitedly with the eagerness to win - before settling down to watch Spring Watch on the TV.

Saturday was equally as good weather wise, and although Mum and I had the cars all packed up and ready to go by 10am, we spent another morning on the beach. The boys wanted to trampoline again - the bouncy castle was boring now. (I remember the holidays when we had to do the bouncy castle every morning before getting on the beach!) They had one last go, practising their somersaults, and then we hit the road around 4pm. 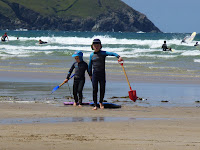 I couldn't believe the lack of traffic! We made it home in good time. Was it really half-term week? 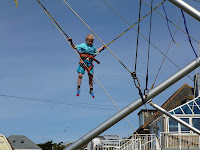 I had tears in the car initially, and when we got home, too. Ben always gets sad when we leave a place we're holidaying at. I used to feel the same sad feeling when I left Woolacombe as a child. Leaves a heavy, empty place in your heart for a bit. Maybe it's a good sign that we enjoyed our stay?

We intend to return next year. I've provisionally booked the caravan! The caravan site is located so near to the beach that the cars never have to move unless we go for a day trip. We just like it too much to want to change.

With these newly purchased wetsuits, I'm hoping to take the boys to Woolacombe (as it's a bit closer to me than Polzeath) in the summer holidays coming up, for a day trip or two, just to keep their surfing skills up. Ben was really getting the hang of it.

What I miss about this holiday: The beach life, the landscape, the sound of the sea, and the ice creams.
What I don't miss: The narrow doors in the caravan, seagulls waking me up walking on the caravan roof and the bed I slept in.
Posted by Teresa F Morgan at 9:17 pm