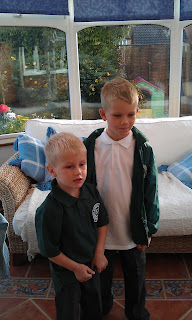 This morning both of my boys were back at school. For Ben, he is starting Year 2. It's his third year at school! (Where did that go?)

Kieran started Reception. He seems so small. He'll only be there until 12.00 today. He's doing half days for three weeks, then two weeks of afternoons (that's going to be a killer), then another week of mornings only. The last week of term he will do full days... then it will be half term  :Sigh:

With Ben he only had four weeks of introductions, so this with Kieran may drag - oh just a little - and won't overly help me with getting into a routine with my writing - especially with the two weeks of afternoons! Pulls hair out.

I have already felt one benefit morning of them both starting at 8.45am though (usually Kieran went into preschool at 9am). I was able to get out and do my run quicker. So hopefully, I should have a little more time after my exercising from now on.

This week I will concentrate on getting the house up to scratch. In the summer holidays I had less time to do the housework, believe it or not. It sounds ridiculous, but when you're meeting one mum here, another friend there, lots of different day trips out, then I work weekends etc. I couldn't find the time to just throw the hoover around! You don't even want to look at my bathrooms.

I need to go into town too. I can't stand shopping with kids and there are bits I need (including fruit ready for Christmas cake making). So I'm going to make a list of jobs, and get stuck in.

I need to make time for magazine and newspaper reading if I'm to generate some articles, so this will be with my coffee.

My plan is (once both boys are settled into school full time - so we're looking October/November here) to have housework done, dinner organised, writing done and running three times a week in. Then, when both boys finish at 3.15pm, I want that to be their time. There will be after school clubs that we do (Swimming and Stars), plus meeting friends at Puxton. I think Ben will start getting more homework too. Eventually, I'm hoping that if I get 2-3 hours of writing (or writing related activities i.e. if editing) in a day, at least 1000 words written, I can then have a more leisurely pace of an evening. Watch some TV (not every night - not getting back to that routine) or read more - and not feel guilty about it!

This is the plan. But you never know... because kids throw all sorts of spanners into the works.
Posted by Teresa F Morgan at 10:29 am