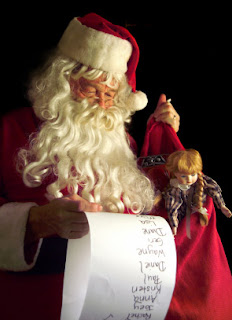 Yesterday I was driving the kids to Puxton Park when my seven year old commented on how the Santa that came into the school looked different to the one we saw on the steam train ride. I had to tell him that Santa can't actually do all the visits, so he sends in helpers, so unfortunately they are not always the real Santa. He then said, "I want to see the real Santa." And I replied that he probably had, mummy didn't even know the real one from the helpers. Gosh, you gotta be a smart thinker as a mum.

Then, stupidly, I mentioned that the Santa on Saturday (on our Santa Special steam train ride) had a real beard, so he was probably the real one. Now is he going to be looking more closely at the beards?

This is the problem with all these Santa visits. Seven-year-olds get suspicious. I fear this will be the last year when Santa is 'real' for him. I think when he's in a primary school, where the kids stay there till they are eleven, they lose the belief quicker. I was nearly nine, because I went to a first school until I was eight, then onto a middle school. I still remember the arguments with my friend about Santa being real.

And, sadly, someone at school has already said to Ben Santa isn't real. This upsets me!

But a real bugbear of mine is Santa's in naff costumes. I really wish if you're going to put on a Santa visit, he looks the part. And make sure the toys aren't so bloomin' cheap they fall apart in five seconds. This doesn't look good on Santa too!

So look what you get when you google Sexy Santa. Now I'd sit on these guys' knees :D 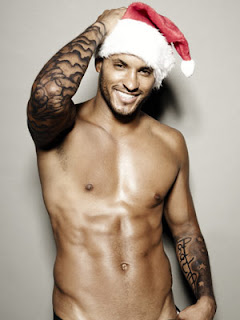 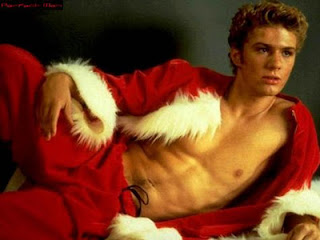