Life Of A Cereal Mum

It's just over two weeks until the summer holidays.  Some of my friends are excited.  I'm not so sure.  What will I do with my kids for the next six weeks, freely?  It's not cheap sometimes, entertaining kids.  Especially if the sun doesn't shine (like for the last two years!).  I've got things in mind, but I won't be able to go out every day. 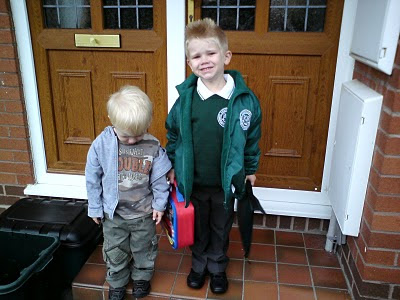 One thing I will not miss is the morning routine, because every morning is the same.  The same things need to happen.  Surely my kids have realised this by now?

Then....
“Eat your breakfast.”  Which is usually Weetabix or Shreddies.  I really don't have time to make them porridge.  That's a weekend treat.
“But Mummy...”
“I said eat your breakfast!  Quickly!”
Once breakfast is over, at 7.45am (it can be no later) I am herding them up the stairs. I'm thinking cows could move quicker.  Into the bathroom they go, my cherubs, squabbling who's going to be 'the winner' or the toothpaste, or who's going to sit on the loo (seat down of course).  I hand each their toothbrush and leave them to scrub their teeth while I rush around, opening curtains and making their beds, repeatedly telling them to stay in the bathroom.  I lay out Ben's school uniform on his cabin bed, ready and waiting.
Rushing back into the bathroom, I grab one child - usually Ben.  A quick scrub with the toothbrush to make sure those back teeth have been hit, then the flannel (trying to make sure the water is actually warm - mean mummy!) to wipe away those sleepy lions.

In the summer I have the added 'bonus' of applying the sun cream.  That eats into your time! And can send your stress levels soaring (well it does mine) when they want to 'help'.
My eldest is left to get dressed on his own, with me shouting out as I dress my toddler, Kieran, “Are you dressed yet?  Remember pants.  Put your socks on!  No, not those socks, the ones I left out!”

"But I wanted my Lightning McQueen ones."

"You're not allowed Lightning McQueen!"
Then relax (sort of).  Both are dressed.  I rush into the bathroom to get washed and dressed myself.  Slap on some make-up – I won’t set foot out of the door without my foundation and a bit of lippy these days.  Can’t be seen as some slummy mummy.  Though compared to some of the pristine mums in the playground... I probably still am.  At least I no longer need to worry about baby sick... just snot maybe?  Kieran is good at wiping his runny nose over you while he gives 'cuggles'.

Usually, while I am getting ready I have the joy of contending with some bickering or squabble.  Just to send stress levels into the red.  I swear my neighbours have probably seen me naked.
Once I'm ready, I direct the children back down the stairs (thank the heavens I only have two – I’m likely to slap anyone who asks are we considering a third.  No!) unless they've gone down to play.

“Please put your shoes on!"

No movement or response while I tear around the kitchen, packing Ben's lunchbox.

"I said put your shoes on!”

"Have you not put your shoes on yet?"
By this point I am sick of my own nagging voice.


Eventually, coats are on (in the winter, or if it's raining).  Lunchbox packed.  Armed with book bag and a water bottle we exit the house.
I can almost hear that bloody bell ringing as we hurry along to school.  Summer is easier in the fact that my youngest isn't trying to jump in all of the puddles, because usually I'd be saying  “Don’t jump in the puddles, you haven’t got your wellies on!”  Teeth gritted by now.

Admittedly, both boys are actually running to school (how long will that last?).  I'm straggling behind carrying the bags and water bottle, trying to stuff the door key into my pocket so I don't lose it.
We get to school in a harangued state (well I do) but at least I’ve got my makeup on.  My new mum friends give me a similar glance of their morning stress of getting their children to school.
I’m not alone.  We’re all cereal mums.

So I'm looking forward to less stressful mornings, maybe I'll even make them porridge... but what the rest of the day will bring - who knows?
Posted by Teresa F Morgan at 11:51 am