One For The Memory Box

Firstly, there are no film spoilers!
Today, for the first time as a family we went to the cinema.  This should be a memorable event.  Hopefully both boys will look back on this and remember being taken to see Toy Story 3.

I'd taken the boys to the 'Kids Club' at Weston's Odeon. The first film they'd ever seen in a cinema was Alvin and The Chipmunks - The Squeakqual (I laughed a lot!) and then, another time, we saw Nanny McFee and the Big Bang (another good film!).  Kids Club operates at weekends, and during the holidays.  It's usually a morning showing of a film (not usually a new release, possibly released 2-3 months prior), and you pay only £1 per child, adults getting in free.  I'd used this as a way to see if my kids were ready to sit still and behave in a cinema.  If they didn't, then I knew I'd only paid a £1, and so had everyone else, so you could anticipate and accept some disturbances.

But for some reason, these two trips to the cinema didn't quite feel like a proper cinema event - although they were - because we hadn't been as a family.  My husband hadn't yet got to come and join us in this fun.  And I suppose because they were a cheap morning out, and you're not really seeing the latest release it didn't seem as big as today. 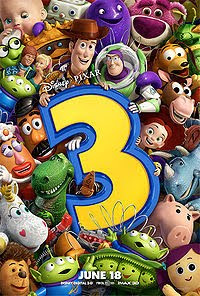 Toy Story 3 has been the latest movie to hit the big screen in time for the summer holidays.  It's competing with some popular movies that are on; Eclipse (rated 12A), The Karate Kid (rated PG) and The A-Team (rated 12A - that's on my list to see next week!).  Okay, so Toy Story 3 is a U... but it has adult humour.  If you're a big kid, you won't be disappointed with Toy Story 3!

In the week I'd suggested it to Dave, and so he went about getting tickets for today.  Weston Odeon were only showing the 3D version, and after some thought on it, we really couldn't see Kieran sitting through a whole film with 3D glasses on.  Also, the price was extortionate!  So, we got a family ticket, dashed up to Vue at Cribbs Causeway after I'd finished work, and got some good seats in the 2D viewing, saving us over £10.

Kieran sat the whole way through as good as gold.  Occasionally he asked for a sweetie from his dad.  But otherwise he was mesmerised.  I admit, I was worried about his staying power.  He isn't quite 3 and half.  Ben got upset mid way through when he thought it was a bit scary.  I didn't really think about it as I tried to console him, (nervous the whole cinema could hear him sobbing) telling him it will have a happy ending.  I actually hadn't realised a couple of the characters were scary to him.  He's such a sensitive soul!  I found him crying the first time with Monster Inc (when Sully has to say goodbye to Boo) that I have on DVD .

So going to the cinema today was a big success and something we hope to do more as a family together - funds provided of course (it's no longer a cheap day/night out).  And Dave and I are thinking of all the films we can go and see, which we wouldn't normally, because of course, the kids want to see it!  Cats and Dogs - The Revenge Of Kitty Galore looks so funny!

Driving home, all uplifted by the greatness of the film, Dave and I were discussing how the boys will probably remember today, Toy Story 3 being one of the first films they saw at the cinema.  I remember my first cinema experiences, I remember seeing Dumbo, the days when you walked in even if it was half way through, and sat there to watch it again (we did).  I also remember seeing Mary Poppins, and the cinema was so full, my brother was sitting right in front of me, on the end aisle, giggling away in his seat as Dick Van Dyke lowered his trousers and danced/waddled with the penguins.  I still remember that image.  And I suppose the one I remember the most - being that bit older - my dad took me and my brother to Leicester Square, and we sat in the 'circle' rather than the stalls, watching Ghostbusters.  I won't ever forget the ghost in the library at the very beginning scaring the whole cinema witless as it came towards us filling the whole screen!

With all the excitement, I said, today should be put in our diaries as a memorable moment, and Ben said, in his most serious tone, "But I haven't even got a diary."  Dave and I laughed.  I reassured him that it would go on my blog.
Posted by Teresa F Morgan at 7:33 pm