Catching up today with my blog, as I ended up having a brainstorming session with my 'Betas' last night, and just had to write my story, novel, book, whatever - feels a bit weird calling it a novel/book yet... But I just had to write it up. 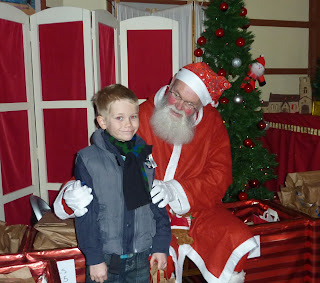 Yesterday, we went to see Santa.  It was a special day, with Nanny Chris, Grandad Alan and Grandad Ron joining us.  We travelled on a steam train from Bishops Lydeard, where the kids got chocolate treats and a carton of juice, and the adults got mince pies and sherry.  (We definitely got the best deal!)

Professor Popcorn was the entertainer who travels along the train to keep the kids occupied - he's jolly good fun, even if we've seen his jokes before.  Actually, that makes it funnier, as we played along better for him and had a good heckle giggle.

The journey is only to Crowcombe Heathfield, which is usually the first stop if you do the steam train rides generally, but I think they travel a bit slower to give us a good train journey.  The station's waiting room has a lovely coal fire to warm up by.

We arrived at Bishops Lydeard early, to watch the trains come and go - the boys are never bored!  Kieran went extremely shy with Santa and wouldn't stand near him, but Ben was happy to chat and pose for the camera.

Ben and Kieran even got to stand on the footplate and warm up by its fire!


Arriving back at Bishops Lydeard, Ben really wanted to stand on the bridge that goes over the line and get 'hit' by the steam - having seen it happen to other people on the bridge when we'd arrived.  And Grandad Ron is always game for funny antics.  We only had a five minute wait for the train to head off on its next Santa Special (we'd already been standing around watching the train fill up with water etc.)  So the boys (this includes Grandad and Daddy) stood, waiting for the train, and its steam to engulf them.

The day before I had helped the boys write their Santa's List, and I realised how manipulative we are in doing this.  We sort of put the 'toys' into the boys mouths of what they want.  Admittedly, we had asked them a while ago, (I'd made the mistake of showing them the Argos catalogue) and I'd started a list - which we could then work off.  Then, actually writing the list, and knowing what we had already bought them, we encouraged them to put these toys down.  Ben was determined to put a Darth Vader Helmet on his list - but he's not getting one!  They're forty quid, and to be honest, I can see the novelty wearing off very quickly and not really having a lot of play value.  (We did say that this list is to give Santa ideas - he can't get them everything off the list!)  They both are getting Lightsabers - yes I may regret this!  Ben's will be red, and Kieran's blue.  We made sure the specific colours went onto the list, too... to make Santa look extra good.

Today (my blog does say Day 13 too) I wrapped cocktail sausages in streaky bacon, putting them in a dish ready, and froze them.  My sausages went out of date early, and was going to have to freeze them, so decided to have them all ready for Christmas day would be the easiest thing.  I've had to sacrifice my run today.  I'm starting to panic, and stress, deciding that in my three hours of no kids (Kieran at preschool) I had to get some present wrapping done - which I did.  Plus I have put up my card holders, and the fibre optics Christmas tree and light up snowman are now in the lounge window  I was extremely busy this morning, and failed to actually get around to the housework.  That's tomorrow's job.

Now I must get back to my story... the plot has thickened, and I've got a really good idea for the Hero's mum. I've been worried that this story didn't quite have enough of something, but wasn't sure what.  But yesterday, was like a Eureka moment.