Day 15 - Early Christmas Present To Me

I've had a very busy day today.  My three hours of freedom were well spent getting myself organised, and even going for a run.  Thought I'd better get one in before Christmas.  Not sure if I'll be able to next week, as both the boys will be off school/preschool. I had a pleasant surprise on the bathroom scales this morning, and it motivated me to burn some more calories - that's all I can say!

Forgot to take gloves out with me though - gosh, it's cold out there.  By the two mile mark my hands had warmed up.

I went to collect Kieran at midday, and we sat in the church (where he goes to preschool) while he ate his packed lunch, because half past twelve we had to catch a coach to Sanders Garden Centre, where we saw Santa again!  I just couldn't see us getting home and lunched, and back out the door for twelve thirty!  I know my limits.

I do wonder if the kids think, "He doesn't look like the Santa I saw (for Kieran) Sunday..." I have tried to say that they are not always the real Santa, though it's hard to tell.  Although Santa is magical, he's not that magical - he can't be in two places at once, so he has helpers this time of the year.

Unfortunately, I can't post a picture of Kieran with Santa.  For one, he never looked at the camera for me, or wouldn't stand with Santa for a photo, and so the pictures I do have contain other children (and the back of Kieran's head).  And they're all a bit hot on posting kids on the net lately, so don't wish to upset any parents.  However, this is Josh (and I got his mum's permission) with Kieran.  They get on really nicely, it's so cute. 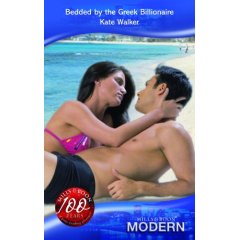 When I got home the postman had been, and there in my hallway was a parcel for me.  Yes, my book, Bedded By The Greek Billionaire had arrived from Kate Walker.  She's even signed it, and I got a pen too, celebrating her 25 years of writing.  A Christmas present come early!  Think I might try to read this next, too.  I was looking for a book to read.
Posted by Teresa F Morgan at 9:41 pm