Is It Me Or Is Time Flying?

Where has March gone?  Seriously.  Friday is the 1st of April.

April is when I said I'd start editing The Wedding Favour!

This week I've got to pull my finger out and get that first fiction assignment off.  I only have the second exercise to do, which I started but I think I've done the wrong way around.  I've just used the POV of someone to look at the characteristics of other people in a restaurant, where I think I'm actually supposed to do it from inside those characters' heads.  Show a brash, confident character.  I only have three characters to do, and 150 words to do it for each character - easy, right?

I've been thinking about my second novel, and looking forward to starting that.  I do think I need something else to concentrate on, to make me sit down and write.  Though, I should be concentrating on smaller projects i.e. short stories, to see if I can generate some income... so that I can give up my stifling weekend job.  (I'd rather be around my kids arguing than go there to work!)  Editing should get me working hard again - once I start focussing on something, then it's hard for me to stop.  Currently, I've been ambling around my study.

I'm wondering whether to enter The Wedding Favour into the Yeovil Prize which was advertised in Writing Magazine (March issue).  I have until the 31st May to have polished the first three chapters and a synopsis.  I've been reading like crazy - 13/40 books so far - so ahead of schedule there, which will mean I have lots of time for editing and reading The Wedding Favour.

I still haven't heard from Woman's Weekly about a short story I sent to them in January.  It was called Life After Death, about a young woman in labour who has lost her husband.  I saw on Womagwriter's Blog that they wanted 'risky' stories, so that's what I sent them.  I'd like to think it's an emotional piece, which does end happily.  I anxiously await the post every day now for news of rejection or acceptance ... 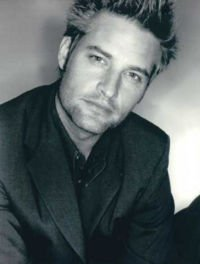 Now taking a leaf out of Rachel Lyndhurt's blog, I'm going to share with you Adam.  He started off inspired by the likes of Bradley Cooper (he's my new obsession) and Dirk Benedict (he's my old one) but I found this wonderful picture of Josh Holloway.  I'd described, or should I say, Sophie had described Adam with sandy blond hair.  One of my writing pals couldn't picture it, till they googled and come up with Sawyer.  Adam is a lot 'cleaner' than Sawyer, and far from a rogue but this picture really is spot on with Josh there in a suit - shame it's not in colour. 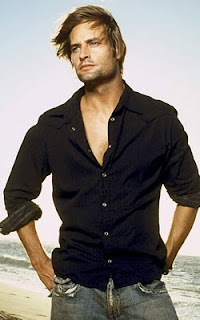 Really must make more of a habit of putting hot male inspirational pictures on my blog.
Posted by Teresa F Morgan at 2:52 pm