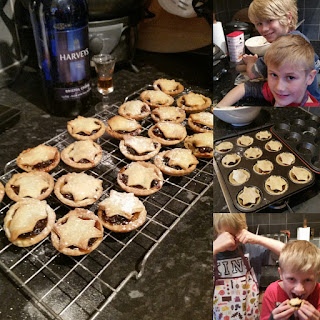 Behind door 23 is mince pies!

Yesterday, the boys and I baked our mince pies. It's a lot of stress for someone who doesn't like mess and is a bit controlling in how she likes things done, but mince pie making is relatively easy to do with kids. (She said after consuming a couple of glasses of sherry). It doesn't help that I have a small kitchen either.

I had also bought a kit from Ikea for a gingerbread house, thinking that my eldest might like to make it. Again, a bit stressful, but I tried to stay out of it, other than the making of the icing, and gave him free decorative rein.

I don't think it turned out too bad considering. I actually thought it would collapse as soon as the roof went on, but it held! Yay!

I used to make a Christmas cake and feed it sherry leading up to Christmas, but I haven't done that for a couple of years now, only because it won't get eaten. I'm not really a big cake Christmas cake eater, but I love icing it! And there is only so much food I can have in the house as I don't like waste - or Christmas would go on until February with the amount of cake we have to get through. 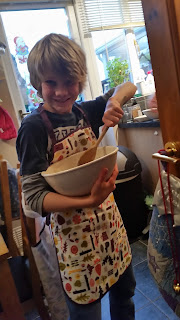 Tomorrow, Christmas Eve, we'll be making the Yule Log which Ben is a big fan of and cooking up the gammon.

When I say making the Yule Log, I buy a cheap chocolate swiss roll and ice and decorate it. :) But that's the boys' Christmas cake done.

Do you bake mince pies or have your own Christmas baking traditions? 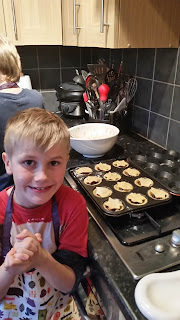 I am trying to make mince pie baking a little tradition for me and boys each year. That way I don't have to buy them, and they're inclined to eat the ones they've made. 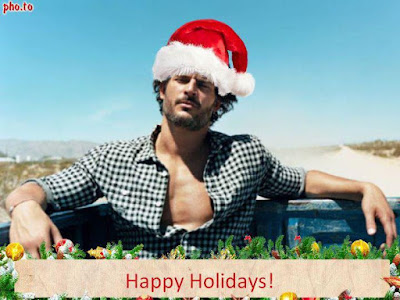