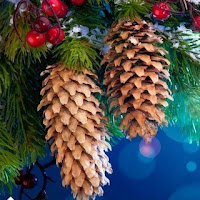 Behind door number 5 we have Nancy Holland!

Thanks for having me on the blog, Teresa. What a great theme! I remember Advent calendars from when I was a kid. It felt like it took so long to open them, door by door, until the big day. Now the holidays whiz past before I'm ready for them.

Another of my favorite holiday traditions is mince pie. My grandmother used to make it from scratch, but my mom bought a "starter" box of dried fruit, then added cider and rum. Once I was on my own, I always made it for the holidays (without the rum) and everyone loved it -- except the man who became my husband. For his sake, I added chopped fresh apple to make the pie less sweet, but once we had kids he was happy to let the rest of us eat the mince pie and focus on the pumpkin pie.

Although mince pie was a regular part of my family's Christmas, however, the people where we live now, in Minnesota, don't seem to eat it. I have to go to a high-end grocery store to find the starter boxes, and sometimes all they have is prepared mince pie filling in jars, which is never as good. Sometimes even the fanciest places don't have mince pie makings at all!

Which shows, I guess, that Christmas in the U.S. isn't the monolithic celebration you might think from what you see on television or read in magazines. We have too many different traditions here for that -- my family's British ones, my neighbors' Scandinavian ones, and many others. Not to mention the many Americans who don't celebrate Christmas at all, although lots of them have other traditions that bring spiritual light to the darkest time of the year.

I tried to imagine what Christmas would be like for Madison and Jake in my debut romance Owed: One Wedding Night, but had a hard time coming up with anything but a cheery fire in the fireplace of their penthouse overlooking San Francisco. Then I realized why. Madison and Jake live in California, where December is too warm to be Christmassy. Another reason was that, for most of the book, they don't have the kind of relationship that makes gift-giving easy. Here's how Jake gives Madison her engagement ring, for instance:

One afternoon, when she returned to Dartmoor headquarters after a visit to the Walnut Creek store, a small square box lay waiting for her on her desk. She opened it to find the diamond, emerald, and sapphire ring she and Jake had designed for her when they were engaged the first time. She allowed herself a sentimental cry. . .

Not very romantic, although I will say in Jake's defense that he was out of the country at the time. Of course he learns his lesson by the end of the book, so I'm sure all their Christmases will be merry ones. And they'll always have mince pie.

What are some of your family's favorite holiday foods! 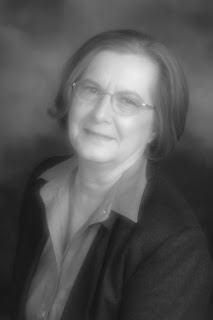 
Born in California (and always a California girl at heart), I'm now a teacher in the Upper Midwest. I wrote my first novel at the age of seven – a saga about a family of chipmunks and the family of ducks who lived in the pond next door. I’ve been writing ever since.

My husband and I are lucky enough to have two smart, wonderful children who live on opposite coasts of the US. Since I've become a Harper Impulse author, my remaining daydream is to live in Paris or London. 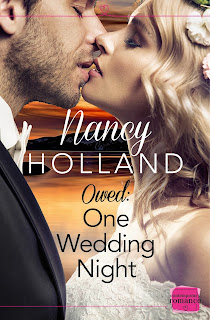 
Jake Carlyle always gets what he wants...especially when it comes to his runaway bride. To save her family's business, determined Madison Ellsworth must turn to Jake Carlyle, her ex- lover and the man she left standing at the altar. Jake eventually agrees to help, but on one condition - he gets what he's owed. His wedding night. Still in love with Jake, Madison agrees, but once the passionate honeymoon is over, she can't help but wonder if their marriage is based on convenience, love -- or revenge. As they deal with the failing business, Madison and Jake soon learn that high-stakes games played in the boardroom inevitably spill over into the bedroom!